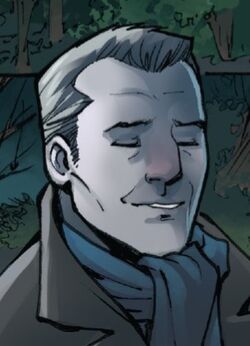 I'm really sorry, Uncle Ben, I let you down. But I won't let that happen to anyone ever again because I really do understand now that with great power, comes great responsibility...

-- Peter Parker speaking to Ben in his grave

Benjamin Franklin "Ben" Parker (born somewhere in the late 1950s to early 1960s, died in the late 1990s), was the older brother to Richard "Richie" Parker and sister-in-law to his wife Mary Fitzpatrick. Despite being raised in difficult conditions, he was as confident as he was wise, hard-working and decent. In his early adulthood, Ben was trained in the United States Army for quite a while, before deciding to retire after five successful missions with his comrades. At some point in time after returning from the army, Ben fell in love with a beautiful young brunette named May Reilly, whom coincidentally went to the same high school as him before they even met, and the two would eventually get married as a seed of their unconditional love for each other after a few years of their to-be-long-lasting relationship.

However, Ben and Mary would later experience several trials and ordeals in their adult life as a couple, which included May's fundamentalist parents and the painful revelation that was May's past relationship with his younger brother Richard back in their high school days, during the times when Ben didn't care to know regarding Richie's love lives until he found out during that very moment. Ben was obviously furious and depraved at first for learning the unexpected, but eventually became very understanding and forgave towards Richie, since the latter was now engaged (and later married) May's close friend, Mary Fitzpatrick, and finally accepted the fact that despite how much the pain and pleasure Mary had encountered with Richie, it was all nevertheless, in the past, thus rendering Ben and Richie to move on with their lives and current loved ones. Both Ben and May had planned to conceive a child in their thirties, only to reveal that May was infertile, which left the two heartbroken for a while, before realizing that not even this dismaying news could sterilize their love for each other.

Despite their consistent, contented, and relieving life as a couple, Ben and May were devastated when Richard and Mary died mysteriously in a plane crash, not long ago, only a week after leaving their son Peter with them. For the next few years, Ben and May cared for and raised Peter like a son. Soon after starting to raise Peter and living with May, Ben was working part-time as a sales talker at a Coney Island fair at New York, raising enough amount of money to keep him, May, and Peter living sustainably before eventually deciding to retire in the Parker household. As time passed, Uncle Ben would willingly take over as Peter's father figure and daily mentor since Richard died, and as Peter grew, Ben recognized and was proud of his nephew's intelligence and did his best to encourage him in academic pursuits. When Peter was bullied due to his intelligence and awkward personality, Ben did his best to cheer Peter up along with his friends, and progressively teach him how to deal with bullies without causing them much harm in return.

When Peter got in a fight with Flash Thompson at school, Flash's parents almost sued the Parkers, but Ben intervened with convincing reasoning. Peter secretly used his powers to get money by participating in wrestling matches, unbeknownst to Ben and May. One day, after Peter had an argument with his aunt and uncle, he went to his friend's house where he was having a party. Ben confronted him there and lectured him about great power and responsibility, but Peter didn't listen to him that night. After Ben was suddenly shot by a fleeing criminal and notorious gangster named Dennis Carradine, the same burglar his nephew failed to stop earlier that same night, near the Parker Residence in his attempt to have a non-aggressive confrontation with Carradine, Peter and his aunt greatly mourned his passing, and Peter himself secretly apprehended the burglar as the mysterious Masked Marvel. Ben's tragic but heroic death would soon become the driving force behind Peter's becoming a vigilante and eventually the popular superhero that was the amazing, spectacular, and ultimate Spider-Man.

Retrieved from "https://marvelcomicsfanon.fandom.com/wiki/Benjamin_Parker_(Earth-61615)?oldid=281419"
Community content is available under CC-BY-SA unless otherwise noted.