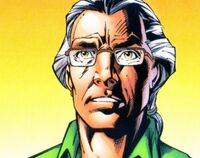 Powers don't make the man, it's the choices we make and how we use them.

Ben Parker was a retired construction worker, the brother of scientist Richard Parker and husband of May Parker. After the death of his brother and his wife, Ben and May became the legal guardians of their nephew, Peter.

While raising him, Peter and Ben became very close. In 2014, after his nephew was bitten by a spider at OsCorp, Ben noticed that he was acting more differently and eventually discovered Peter had spider-powers. Ben lectured Peter in using his powers for the greater good, although Peter shrugged it off and left. Later on that night, a robber came to the house demanding money, Ben attempted to fight him off but was shot and killed.

Retrieved from "https://marvelcomicsfanon.fandom.com/wiki/Benjamin_Parker_(Earth-3998)?oldid=154795"
Community content is available under CC-BY-SA unless otherwise noted.