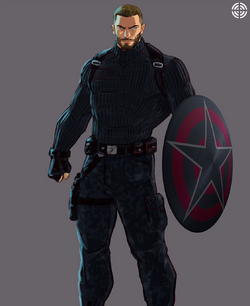 Earth-70
Base Of Operations
The Nexus
Characteristics
Gender

Something about that Silver Sentry guy doesn't sit right with me. This whole team feels like a coverup... there's something he's not telling us.

Ben Grimm was raised on Yancy Street in New York City by his sweet Aunt Petunia. He went on to join the military, where he was eventually selected as the test subject for the recreation of the Super-Soldier Serum that created Captain America during World War 2.

By some miracle, the Serum was a success, and S.H.I.E.L.D. claimed ownership of the "new Captain America". After spending a few months as a black ops agent, he sees a new reel about his old friend Reed Richards and his crew, consisting of Susan, Johnny, and Franklin Storm, were mutated by cosmic rays. They made their public debut as the Fantastic Four, and Ben was quick to follow in their footsteps, out of hopes that he could help inspire the people of the world.

Over time, the number of heroes in the world began to increase, and S.H.I.E.L.D. put Captain America in charge of the Avengers Initiative. They put together a team consisting of Iron Man, Black Widow, Giant-Woman, Falcon, Spider-Man, and the Incredible Hulk. Although the team took some time to learn how to work as a unit, the Avengers quickly became iconic across the world, saving humanity from various threats including the Skrulls, Galactus, and even an invasion from the Dark Dimension by Dormammu.

However, just when the Avengers were at the height of their fame, Captain America was whisked away from their reality by the Silver Sentry, who was putting together a new Team X.

Captain America was outfitted with the Tallus and put in charge of a team consisting of alternate versions of Valeria Richards, Yelena Belova, Colossus, the Ghost Rider, and Rocket Raccoon. Shocked to meet a grown version of Reed and Sue's daughter, Ben quickly became very protective over her.

After leading the new Team X on five smash and grab/assassination missions, Ben began to grow suspicious of the Silver Sentry. However, before he got a chance to rally the team behind him, the Sentry dropped them into a reality where Namor was leading an invasion of the surface world off the coast of Mexico. Cap led Team X into battle, but after he noticed Valeria about to take a fatal attack from Namor himself, Ben jumped in front of her to shield her. But Namor was able to disarm Cap, and impale him with his Trident. This did, however, give Valeria the chance to kill Namor and finish the mission, but it was too late. Captain America was dead.

Retrieved from "https://marvelcomicsfanon.fandom.com/wiki/Benjamin_Grimm_(Earth-70)?oldid=262527"
Community content is available under CC-BY-SA unless otherwise noted.