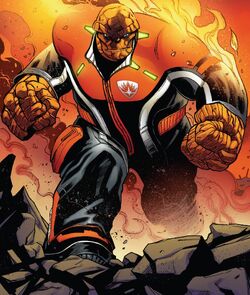 We're living in a f*cked up world, aren't we? I really miss the four, you know... I mean... Not even a magical stone can bring them back... Is there anything else to hope for these days?

Benjamin Jacob "Ben" Grimm was born to neglectful parents on Yancy Street on Manhattan's Lower East Side, where he grew up in a crime-ridden neighborhood burdened by poverty. Thankfully, the young Ben would get the chance to move in with his older cousin's residence in Central City, California, as an optimistic opportunity in order to start a better life compared to the struggles he encountered at Yancy Street. Years later on, Ben decided to join his best friend Reed, close friends Sue Storm, her brother Johnny Storm and Victor von Doom in Reed's spacial project, with the Baxter Building being the testing site of a teleportation project, which sought to pierce the dimensional barrier into an antimatter realm called the Negative Zone. Ben knew that Reed had always experimented with quantum physics, and wanted to see how his old friend was getting along. Along with it, a brutal cosmic ray storm had battered the crew as they were on the alternate dimension, drastically affecting their DNAs, which gave them superpowers in the process, with Ben becoming the stone-skinned orange Thing, and one of the now famous and beloved superhero teams in the world, the Fantastic Four.

Before and after the Invasion, Thing seemed to have the same history with his Earth-61615 counterpart, up until the Fantastic Four discovered the return of Galactus two years after the Chitauri Conflict, who now seemed to have absorbed the several cosmic rays emitted by the destruction of the Space Stone, which gave him godlier powers than they could have ever imagined, proving its cosmic power after Galactus reveals to be responsible for approximately two million astronomical bodies in the span of those two Earth years. Stopping the Devourer of Worlds once more from consuming Earth, they trapped the cosmic being on the Negative Zone to keep him their long enough while they plan a way on how to deal with him and his heralds. Afterwards, the four enter the Negative Zone's Annihilation World, home to the infamous Annihilus, before closing the portal in time from the Baxter to prevent Galactus from ever using it to enter the planet. The four then attacked the Devourer of Worlds, only for the latter to send his battalion of heralds to distract them while he makes a way to reactivate their portal. Thankfully, the four was able to get situational help from their other enemies, Annihilus himself and his Annihilation Wave, who also proceeded to combat the Heralds for the sake of protecting their homeworld.

After a long battle, Reed Richards finally activates the Ultimate Nullifier against a enormously slow Galactus, which weakened him further yet angered him at the same time. Much to Galactus' fury, he tried to obliterate Reed Richards with a powerful wave of energy, only for Johnny Storm to save his teammate and brother-in-law by letting himself get in his way, preventing Reed to be disintegrated. Thought to have been easily killed by Galactus, the Human Torch was actually charged by the blast that hit him, converting the heat blast into his own powers, although Johnny realized that having himself overloaded with such energy, he knew that those moments would be his last. As he thought, Johnny said his goodbyes to his teammates, the very people he also thought of as his family, before making the ultimate sacrifice to take down Galactus with all his might and power. However, seconds before Human Torch could have released his nuclear-like blast at Galactus's face, a few of the latter's surviving Heralds were able to evade both the Annihilation Wave and the heroes and went towards Johnny, tackling him before he could've fly towards their master.

The Human Torch tried fighting off the Heralds only to be overwhelmed by the amount of his adversaries, causing the unstable hero to explode violently due to uncontrollable pressure, but taking those Heralds with him instead of Galactus, which Johnny intends to finish off. Because of this, a guilty Mister Fantastic faltered to see his brother-in-law go too soon, and attempted to single-handedly kill Galactus within Annihilation World in a fit of rage as his last resort using the now fully-activated Ultimate Nullifier. Mister Fantastic finally used the Ultimate Nullifier at the lone Galactus, slowly disintegrating the cosmic being into nothingness as Richards wills the device to kill him once and for all. Unfortunate for Reed Richards, the four's final attempt to end Galactus' reign was once again interrupted after Annihilus tried to take the Nullifier from Richards for himself, unintentionally saving Galactus from permanent death in the form of his own head, the only thing that survived after getting disintegrated by the Ultimate Nullifier. In the aftermath of Galactus' apparent death, Annihilus' attempt of stealing the Nullifier from Richards only resulted in failure, along with Richards, Annihilus and the rest of Annihilation World being disintegrated out of existence since Mister Fantastic failed to deactivate the universal weapon in time. Fortunate for Richards, he was able to forcibly suck both Sue Storm and Ben into the portal back to Earth before closing it for good while Annihilation World gets decimated by the unstable Ultimate Nullifier. Returning to the Baxter Building with broken hearts and unstoppable tears, Sue and Ben embraced in miserable sorrow, heavily grieving upon realizing the fact that the Fantastic Four was no more.

Agents of the Universe

In the aftermath of the overpowered Galactus' return which they prevented, a funeral for both Reed Richards and Johnny Storm was privately held somewhere in New York, wherein it was attended by countless of heroes who paid respects of their fallen comrades, most notably Spider-Man, the X-Men, and the members of the now defunct Avengers. Millions of people across the country, along with billions more throughout the globe mourned the heroes' demise as they lit candles to honor their great memories, knowing that their brilliant and altruistic legacies would be acknowledged by everyone, thus flaming on for eternity. As weeks to months have passed by, Ben and Sue continued working at the Baxter Building and still commit heroic acts handled by just the two of them, despite no longer having rest of the Fantastic Four's spirits to encourage them by their sides, which only gave them a harder time to move on after losing two of their family.

As the two were left to their own devices, the Ben and Sue began to rely on each other's sides to the point that they became romantically involved with each other. At first, both of them knew what the very chemistry they were starting to develop for each other felt wrong, but their fragile emotions and convulsive feelings get the best of them. They knew how lonely they were, and they couldn't control what was going to happen, eventually accepting that they have grown an exclusive feeling of intimacy for each other, not letting the painful past keep them from trying something new in order to get better, and feel better. Eventually, the two got married through elopement. Side by side, the last surviving pair from the Fantastic Four embarks their own newfound adventures and explorations, especially by the moment they were purposely recruited by Tony Stark in joining his S.W.O.R.D. division, S.H.I.E.L.D.'s successor. Dealing with extraterrestrial threats to world security including the likes of the Skrulls, the Kree, and the Mastermind of the Invasion, Ben and Sue was officiated as S.W.O.R.D.'s agents, dedicating themselves in protecting the world from diabolical forces lurking in ever corner across the vast universe, just like how they once served in the Fantastic Four.

Retrieved from "https://marvelcomicsfanon.fandom.com/wiki/Benjamin_Grimm_(Earth-61615.8)?oldid=265207"
Community content is available under CC-BY-SA unless otherwise noted.