The Thing is a playable character in Marvel Ultimate Alliance: Doom's Reckoning.

Ben Grimm is a pilot who joined his best friend, Reed, on a space expedition where the entire crew ended up being exposed to cosmic radiation. While the others gained fantastic powers, Ben was mutated into a rocky creature unable to change back. Reluctantly, he agreed to join the Fantastic Four and named himself the Thing. He and the Four were later recruited by Nick Fury to join the Ultimate Alliance and fight against the Cabal. 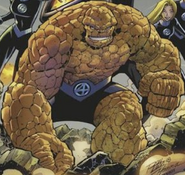 Fear Itself
Add a photo to this gallery
Retrieved from "https://marvelcomicsfanon.fandom.com/wiki/Benjamin_Grimm_(Earth-6110)?oldid=251986"
Community content is available under CC-BY-SA unless otherwise noted.