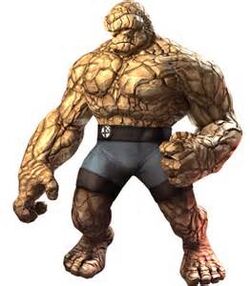 No Hair
Skin
Orange
Unusual Features
Body is covered with an orange, flexible, rock-like hide; No apparent neck; Only four fingers (including the thumb) on each hand and four toes on each foot. The increase in the volume of his fingers has not decreased his manual dexterity. His skin is apparently susceptible to "drying" or what in a normal human being would be called loss of skin oil, for his skin can be "chipped" under certain circumstances. The Thing has no outer ear structure.
Status
Citizenship

Little is known about the Thing's life before the Masters of Evil's attack on the S.H.I.E.L.D. USS Alpha Helicarrier. It can be assumed to be similar to his mainstream counterpart.

Along the rest of the Fantastic Four, Thing joined S.H.I.E.L.D.'s Ultimate Alliance to defeat Doctor Doom.

Some time later, Thing was one of the heroes who went with Fury to Latveria, and when the Civil War erupt, Thing disappeared, wanting to stay neutral. The Pro-Registration forces were attacked at Yancy Street, and the Thing appeared angry for the War coming to him, defeating a nanite controlled Lady Deathstrike. He decided to join the fight in the Civil War with the White Star, and later fought the Fold when they started to take over the world.

Several months after the Fold's defeat, the team was held hostage on the top floor of the Baxter building by the Skrulls; guarded by a rebuilt Dragon Man. Because of failures to respond to calls by the Ultimate Alliance: Spider-Man, Toxin, Electro, and Deadpool are sent in to investigate why. Dragon Man is destroyed, and the Four are freed.

2 weeks later, word gets out of a recent attack at the Vault. The Fantastic Four (including the Thing) is sent to investigate. Upon arrival: they are approached by the Winter Soldier (after the Fold's defeat, Winter Soldier decided to reform) who was put in charge of the Vault by S.H.I.E.L.D. The five fight the inmates until they encounter the Klaw, who manages to incapacitate Winter Soldier. After his defeat, they find War Machine fighting mutant supervillain Whirlwind. A S.H.I.E.L.D. agent says that War Machine was the one attacking the Vault. After fighting through the Iron Cross, Crossbones, and Grim Reaper: the Four see Whirlwind knock War Machine's faceplate off his helmet, revealing a Skrull in the armor. After the FF defeats the Skrull and heads back to base, its revealed that the attack on the Vault was to once again plant seeds of doubt about superheroes in the minds of people (which was a reason the Skrulls have manged to get the Secret Invasion officially started in the first place).

Retrieved from "https://marvelcomicsfanon.fandom.com/wiki/Benjamin_Grimm_(Earth-6109.2)?oldid=154759"
Community content is available under CC-BY-SA unless otherwise noted.