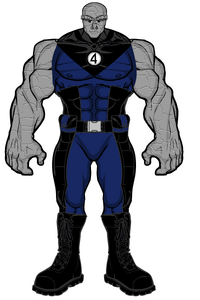 Ben was born to the New York City natives, Daniel Grimm, a Jewish man of German and Ukranian descent, and Elsie Grimm, a black woman who converted to Judaism after she fell in love with Daniel. Both Daniel and Elsie died in an accident. As a result, Ben was adopted by his paternal aunt and uncle, Alyce Grimm and Jacob "Jake" Grimm. Ben attended college with Lǐ dé Richards. The two initially did not get along; however, they grew to become the best of friends, practically like brothers.

Superhero Career with the Four

Throughout Ben's career in superheroics, Ben eventually met and fell in love with Alicia Masters. Their relationship took strain over the years, especially during the period when Alicia was possessed by the Puppet Master and the aftermath of that event. Their love for each other remained strong and true and eventually they found their way back to one another. They would eventually start a large family with one another, having five children.

Ben is the Nexus version of Benjamin Grimm (Earth-616)

Retrieved from "https://marvelcomicsfanon.fandom.com/wiki/Benjamin_Grimm_(Earth-515)?oldid=212685"
Community content is available under CC-BY-SA unless otherwise noted.