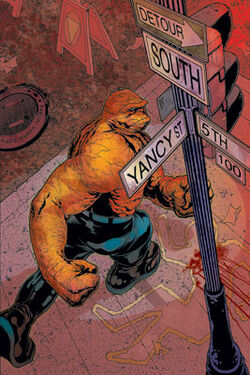 No Hair
Unusual Features
Body is covered by orange rocks; Has no neck or ear structures; Only has four fingers
Status
Citizenship

Engaged
Occupation
Adventurer, Defender, Fantastic Four member
Origin
Origin
One of the Fantastic Four who was exposed to Cosmic Rays, turning him into a man built of rocks complete with great strength and durability.
Place of Birth
New York, New York
Creators

Kid, word of advice for ya: If you happen to stumble upon a clan of goddamn ninjas prowlin' through the night to steal whatever the hell THAT is, you gotta wait for back-up. Not saying yer weak, kid, but there ain't no hero strongest alone.

One of the most famous heroes ever, the Thing is the heart and soul of the Fantastic Four. Despite his rocky exterior and intimidating build, Benjamin Jacob Grimm is a kind man who simply wants to help others. He had embarked on solo adventures, fought some of his team's greatest threats by himself, and even became an Avenger.

The Thing's history mirrors his mainstream version. The Thing pursued a dedicated relationship with Alicia Masters before the two briefly broke up. As seen in the first issue, they have resumed it as Ben tried to propose to her. Aside from that and a mention of a recent fight against Annihilus, nothing else changes. At some point, Ben was a Defender, making him one of the few non-original Defender members to still be one in this reality.

None known. He is not weakened at all if he's separated from his fantastic comrades.

Equipment: Pants made of unstable molecules.
Transportation: Fantasticar Mk. I
Weapons: None known.

Retrieved from "https://marvelcomicsfanon.fandom.com/wiki/Benjamin_Grimm_(Earth-5000)?oldid=214079"
Community content is available under CC-BY-SA unless otherwise noted.