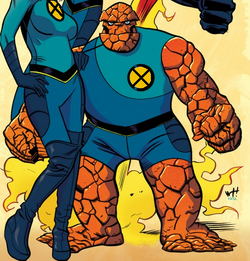 Cure me, Stretch? You kiddin'? I got it good. Fire eyes ain't never gonna see color again. Can't even open his eyes unassisted. I can still see, and hear, and feel. I just have trouble holding a pencil. No, Reed, I'm OK. If I lose my powers, I lose the X-Ceptionals, and it's the best thing to ever happen to me. They're my family and friends. I stay Ben, I stay the Thing. Life is good as it's gonna get, Stretcho, for all of us. There's a war coming, we better fight it while we can. And you'll need the one and only, ever-lovin' blue-eyed Thing to do it!

Ben Grimm's history is the same as that of his Earth-616 counterpart up until planning the top secret government flight with Reed Richards at college.

Retrieved from "https://marvelcomicsfanon.fandom.com/wiki/Benjamin_Grimm_(Earth-3083)?oldid=57877"
Community content is available under CC-BY-SA unless otherwise noted.