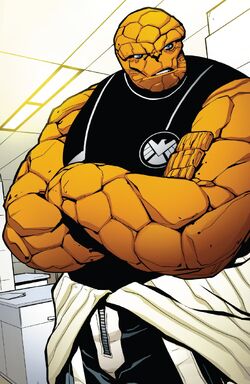 I never thought I'd be sayin' this to you, old pal... but it's clobberin' time.

Ben Grimm was mutated by cosmic rays into the rocky being dubbed the Thing. Despite agreeing to use his newfound strength for good, his condition only developed a rift between him and his best friend, Reed Richards.

After the siege of Midgard resulted in the fall of civilized society, Thing was forced to abandon Reed for good after he had a psychotic break and adopted the alias of the Maker. Grimm went on to join several other heroes and surviving citizens to become Latverian citizens and reluctantly live under Doctor Doom's rule.

Since becoming an integral part of the Latverian government as an agent of the new S.H.I.E.L.D., he has begun dedicating all of his time to the Avengers, despite Captain America often urging him to take some time for himself.

Retrieved from "https://marvelcomicsfanon.fandom.com/wiki/Benjamin_Grimm_(Earth-2001)?oldid=261582"
Community content is available under CC-BY-SA unless otherwise noted.