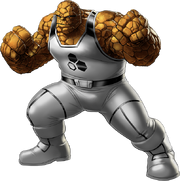 No Hair
Skin
Orange
Unusual Features
The Thing's body is covered with an orange, flexible, rock-like hide. The Thing has no apparent neck. He has only four fingers (including the thumb) on each hand and four toes on each foot. The increase in the volume of his fingers has not decreased his manual dexterity. His skin is apparently susceptible to "drying" or what in a normal human being would be called loss of skin oil, for his skin can be "chipped" under certain circumstances. The Thing has no outer ear structure.
Status
Citizenship

Presumed to be just like Earth-616, where Reed Richards needed a pilot for an unauthorized test flight into space using an experimental rocket of his own design. While the rocket might have made it possible to travel to other star systems, Reed's financiers were losing interest. Reed's girlfriend Susan Storm and her younger brother Johnny insisted on joining Reed on the flight. Reed's old friend Ben Grimm was convinced to pilot the rocket. Once in space, the rocket was bombarded by a wave of cosmic radiation. The craft crashed back down to Earth. Emerging from the ruins of the spaceship, they discovered the radiation had mutated their bodies and had given them remarkable new abilities.

When the army launched Gamma bombs at countries all over the world, Johnny and Ben were the only members of the Fantastic Four to survive.

Ben was driven mad by the Gamma radiation and killed Johnny when the latter teased him.

Once I.D.U.N. was founded, they confronted an Incursion leading to Earth-102751.

They first met this world's version of the Thing.

Ben was surprised to see Sue Storm was alive. But shortly afterwards he was driven mad again by the Gamma radiation inside of him.

Susan was able to drain him from the Gamma radiation and brought him to Pandora's Box in order to take care of him and heal him.

Benjamin is a melancholic human being and a hot headed one as well.

The Thing received his powers when cosmic rays bombarded his body. He is extremely strong and durable.

Rock-like Skin: The Thing possesses a smooth, rock-like hide as a result of exposure to cosmic rays. The mutagenic process caused his musculature, bone structure, internal organ composition, soft tissue structure, and skin to greatly increase in toughness and density.

Expert Pilot: Ben is an exceptionally skilled and experienced pilot, proficient with many varieties of both conventional and exotic aircraft.

Experienced Astronaut: Ben has also trained as an astronaut and was piloting Reed Richard's spacecraft during the team's fateful bombardment with cosmic rays.

Master Combatant: He is uniquely gifted in the art of hand-to-hand combat (a skill Ben honed long before he became the Thing), though his fighting style tends to be a rather loose brawling technique all his own. This style often incorporates collegiate wrestling techniques, Boxing (as he has been stated to have spent hours upon hours honing his boxing skills in the gym during college), and on at least one occasion even Jujutsu. In his youth, Ben was a talented football player.

Indomitable Will: One of Ben's remarkable qualities is his extreme willpower. Whatever obstacles may come, he would try until he overcomes them or dies. In fact, during his fight with the Champion of the universe, despite suffering severe injuries, he kept coming back, making the Champion remark that while he could break every bone in Ben's body, he could never defeat him, as he could never break Ben's spirit, and forfeited the fight so that he wouldn't be forced to hurt Ben anymore.

It is shown in Assignment 1, however, that once you drain him from the Gamma, he will return back to normal.

Retrieved from "https://marvelcomicsfanon.fandom.com/wiki/Benjamin_Grimm_(Earth-102751)?oldid=154586"
Community content is available under CC-BY-SA unless otherwise noted.