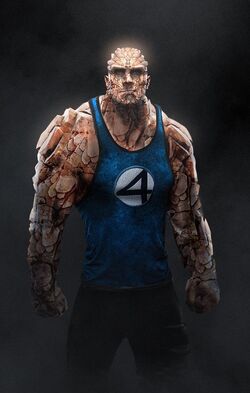 Come on kids, say it with me! It's clobberin' time!

Ben Grimm attended High School in California alongside Reed Richards. Ben was one of the only people in school who was genuinely interested in Reed as a person, and was fascinated by his overwhelming intelligence. However, Reed left High School when he was 14 to attend college.

Ben then went through the remainder of his High School days as a football star, and later ended up attending college where Reed was teaching a physics course. The two became close friends once more and ended up encouraging each other to follow their dreams. Reed then went on to work on a space expedition with Project: Pegasus and Ben went on to join the Air Force.

After graduating with a perfect score, Ben ended up being recruited by Reed to join his expedition into space alongside the Storm siblings, Susan and Johnny. Ben was chosen as the pilot for the mission to study cosmic rays. He helped finalize the designs on the Marvel-1, and felt like he'd finally found what he was meant to do in life.

The mission was unsuccessful. The launch went off without a hitch, and the scientists were able to get accurate readings at first, only to be caught in the cosmic storm. Crashing down on Muir Island, they all became mutated by the radiation. While Reed, Sue, and Johnny developed fantastic powers, Ben was transformed into a creature of rocks, and went on to call himself the Thing.

Believing his life to be over, the Thing agreed to let Reed run tests on him, holding out a slight hope that he'd be able to reverse the transformation. Over time, Ben was able to adjust to the way things were, especially after he had a chance to use his powers to save people. He began to think that maybe he did fulfill his purpose, and now it was his responsibility to protect those who can't protect themselves.

Although Ben had become resigned to the fact that he'd never find love again, he soon discovered that wasn't true. He met a beautiful woman named Alicia Masters, who was blind, and was fascinated by Ben. The two quickly formed a deep connection that couldn't even be broken by Alicia's criminal father, the Puppet Master. Since falling in love and saving the world many times over, Ben has been happier than he ever thought he could be, even coming to embrace his appearance.

[[Category: In a Relationship with Alicia Masters Characters]]
Retrieved from "https://marvelcomicsfanon.fandom.com/wiki/Benjamin_Grimm_(Earth-101)?oldid=250172"
Community content is available under CC-BY-SA unless otherwise noted.