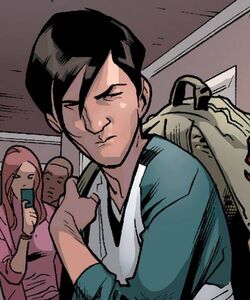 Benjamin Deeds was an average college student at the University of Texas at Austin until his mutant powers manifested during a pro-mutant rally on campus. Media and other students seemed to welcome him with open arms.

The festivities were cut short by the arrival of Cyclops to retrieve Benjamin. They were shortly followed by the Hellfire Club. A battle ensued, and Benjamin was left at the campus.

Benjamin was expelled from school for being a mutant and every time he tried to call his parents by phone they didn't answer. While leaving the school, Abigail Brand of S.W.O.R.D. approached him and convinced him to come with her and promised him that he could leave if he didn't like it.

Benjamin is a mutant and has displayed the following mutant powers:

Retrieved from "https://marvelcomicsfanon.fandom.com/wiki/Benjamin_Deeds_(Earth-1010)?oldid=148704"
Community content is available under CC-BY-SA unless otherwise noted.