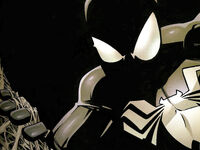 Ben Reilly is the perfect clone of Peter Parker better known as Spider-Man. Initially confused about who is the real Peter Parker, Ben always possessed the heart of a hero and even took on the Spider-Man mantle with Peter's blessing. However, Ben was killed in the line of duty by the Goblin.

2 years after his death, Hydra wanted their own Spider-Man who would be absolutely loyal to them. Hydra resurrected Ben and completely warped his state of mind tragically changing the former hero into a ruthless agent of Hydra!

Retrieved from "https://marvelcomicsfanon.fandom.com/wiki/Ben_Reilly_(Earth-200)?oldid=200154"
Community content is available under CC-BY-SA unless otherwise noted.