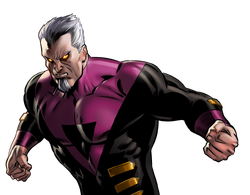 Bastion was "born" when the giant robotic Sentinel, Master Mold, created a human-like Sentinel, far superior from the Nimrod Sentinels and was deactivated until Senator Robert Kelly activated the Sentinel Program.

Bastion's prime directives were soon reawakened, and he began assembling the international anti-mutant strike force Operation: Zero Tolerance (OZT). They attempted to reconfigure the Sentinel force assembled by Project: Wideawake, but Bastion deemed most of them outdated. Instead, he had a number of humans secretly outfitted with nano-technology to be Prime Sentinels.

With Wolverine changing the timeline, Bastion ceased to exist.

Cybernetic Body: As a cybernetic life form he possesses all of the various superhuman attributes:

Superhuman, able to lift at least 10 tons of weight.

Retrieved from "https://marvelcomicsfanon.fandom.com/wiki/Bastion_(Earth-1010)?oldid=149037"
Community content is available under CC-BY-SA unless otherwise noted.