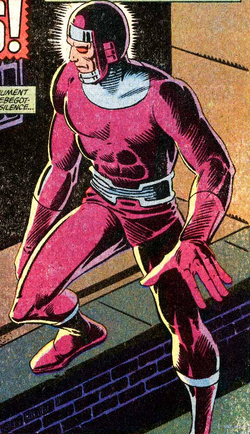 After suffering the worst bipolar episode of his life and making threats on his life, David Stack realized that the best way to balance his son and his work would be to literally fuse them. He brought his son to his work after hours, and hooked him up to the Adamantium prototype Machine Man Z2P45-9. He attempted to transfer his son into the robot by electrocuting him and placing the currents from his son into the robot, powering it up with Aaron's thoughts inside. However, Stack's colleague Joe Kragg was also at the lab late, and noticed what the doctor was doing. He decided to blow the lab's electrical power in order to ensure the robot depowered. Instead, the lab was overloaded with electricity, killing both of the Stacks and awakening the robot, seemingly successfully containing the soul of Aaron Stack.

Irrevocably shaped by his father's last words of wanting peace for the world, Aaron resolved to try to bring this wish to fruition. With no ties left, "Aaron" roamed the wilderness, helping others and, plagued by Aaron's fractured psyche, trying to destroy himself. He was repeatedly hounded, however, by the military and by Colonel Kragg. Being his first new interactions with humanity, the "robot side" of Aaron grew to mistrust his new peers. He only found solace when he was aided and offered a home by Doctor Leonard Samson, who had found the robot and didn't seek to turn him in. He acted as field support for him sometimes as Doctor Samson, the superhero, but mostly stayed in the background. Either way, he managed to dispatch Colonel Kragg, seemingly for good, while restoring Aaron's faith in humanity in the process.

During this time, Doctor Samson acted as a good friend and psychiatrist, trying to heal the robot's broken psyche and finding him employment at an insurance agency. He had to learn to manage his self-destructive tendencies, even though they tended to aid him in battle since he couldn't be destroyed. But when seeking a job, a former aide of Samson's known as the Binary Bug was seeking his revenge against the world, starting with this company. Aaron managed to stop him, but at the cost of his life. Aaron would go on to work at Delmar, and would secretly handle their cases involving superhumans as Machine Man.

Spreading His Business Around

Aaron first encountered other superheroes when he was tracking the recently-revealed supervillainess known as Ion due to the property damage she was causing. Terrified by her condition, she sought out the scientific aid of the Fantastic Four to help cure her. She caused a rampage in the Four's lab and was stopped by the Human Torch and Machine Man working in conjunction. He left afterwards on good terms, and the team said they owed him one for his help.

Machine Man next found himself fighting with the strangest of possible foes: the Hulk. At Doctor Samson's request, Barry tried to bring Banner in for psychological evaluation/therapy, outside the hands of the government. Banner said no, and a feud ensued. Machine Man proved the victor, gaining Hulk's respect. He would later battle the Hulk again alongside the Heroes for Hire before the four would unite to take down the crime lord known as Nightshade.

Before long, however, he found that his old foe Baron Brimstone had allied with the Sandman. It was up to he and Spidey to team up and stop them. TO BE CONTINUED...

Retrieved from "https://marvelcomicsfanon.fandom.com/wiki/Bartholomew_Aaron_Stack_(Earth-166)?oldid=156857"
Community content is available under CC-BY-SA unless otherwise noted.