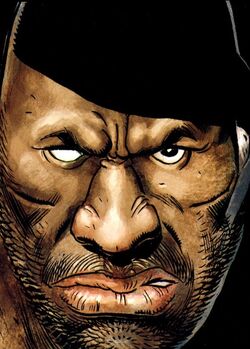 Earth-61616
Base Of Operations
Mobile across Florida
Characteristics
Gender

You, again? Oh, I've had enough of you, you stupid motherfu--

-- Barracuda's last words, before getting shot by the Punisher

Before the years of Ultron Revolution, Barracuda seemed to have the same history as his Earth-200111 counterpart, with the exception of his death at the hands of his nemesis, the Punisher, until Ultron started an all-out war against humans and those who dares to oppose him and his ideologies. Nobody knows exactly how and why it happened aside from Barracuda himself, but he and his gang enforcers were able to rule a large portion of the underground evacuation megacity (secretly built by Stark Industries a long time ago) of Florida within a year's time; creating a brutal, clandestine criminal community that continued to rise and reign for almost a decade. Unfortunately for Barracuda, their criminal activities eventually came to an end during the Ultron Revolution's Year 10, specifically during the day of humanity's victory against Ultron. After his men were exposed to the authorities, he and his enforcers were apprehended and were immediately taken into custody, much to his dismay that his "throne" as a crime lord didn't last as long as he anticipated.

When the undoubtedly evil Empire began to progressively reign in secret thanks to the political power and influences of Edward Stark a few years later, Stark sent his operatives to Florida in order to secretly free Barracuda and the rest of his surviving men from prison. Stark himself then confidently recruited Barracuda and his enforcers into one of his empire's subsidiary organization known as the Syndicate, offering him the power and fame he had always possessed since Ultron Revolution. Easily interested, but still remaining cautious hearing Stark's offer, Barracuda tries to threaten Stark's life, telling him that he would not hesitate to kill him and his men if he betrays and abandons Barracuda to the authorities.

Assuring that Stark's deal with Barracuda was sincere and not a scam, he introduced one high-ranking member that would surely convince him to trust Stark, revealing that man to be Microchip, the Punisher's former partner and friend turned enemy. Barracuda began his allegiance to Edward Stark and his newly-governed crime organization, the Syndicate. With it, he and his men were able to easily reclaim his criminal reign over Florida, becoming the state's governor after setting up a successful assassination attempt on the original governor, with the help of Stark's power as the long-time head and founder of H.A.M.M.E.R. At some point later in time, Barracuda was re-recruited in the Empire's mission to set up a series of terrorist attacks across the country and assassinate multiple selected targets in certain countries all around the globe, later revealing to be heroes who were or would be retiring soon.

During the Punisher's extreme and vengeful crusade to eliminate those responsible for his second family's deaths during the Central Park bombings and the assassination of retired heroes, he eliminated several crime lords, drug dealers, and many more notorious criminals in the Syndicate whom Microchip had worked with before. After assassinating the corrupt Russian military officer Nikolai Zakharov and dismantling his faction somewhere within the United States, the Punisher's next target was none other than Barracuda. At the time of the Punisher's arrival at their main headquarters, Barracuda was completing an assassination on former P.O.T.U.S.-turned agent and advocate of the Resistance Matthew Ellis, in which they were successful.

When Barracuda alone returned to their main headquarters back in the White House, he was stricken with confusion and shock to find out that his entire team was literally painted red, after seeing each of his enforcers all brutally and mercilessly slaughtered. Before Barracuda could respond to the shocking discovery by triggering the alarm system and calling backup, wondering why it wasn't even triggered in the first place, he suddenly heard a rifle cocking from behind. As he slowly turned around, he was completely surprised and angry to see that the man behind the massacre of his men, was actually the Punisher himself, Frank Castle, holding an AK-47. Before Barracuda could use his knife to defend himself from the brutal vigilante, he cursed at Frank as he unhesitatingly fired a few shots straight into Barracuda's face, destroying his entire face and killing him instantly.

In the aftermath of his assassination, his criminal faction died along with him for good, subsequently freeing the state of Florida from the tyrannical rule of the Empire. Unbeknownst to the Punisher and himself, Barracuda was succeeded by another mysterious individual, who has an unknown, unrevealed connection to the previous Barracuda, who took both his name and a few members of his dismantled crew to continue his predecessor's legacy after the fall of the Empire. However, his assault was short-lived as well, even shorter than the original, after he and his enforcers was also shot down by the next Punisher since the death of Frank Castle, Kathryn O'Brien.

Seemingly those of Barracuda of Earth-200111.

Seemingly those of Barracuda of Earth-200111.

Seemingly those to Barracuda of Earth-200111.

Retrieved from "https://marvelcomicsfanon.fandom.com/wiki/Barracuda_(Earth-61616)?oldid=216806"
Community content is available under CC-BY-SA unless otherwise noted.