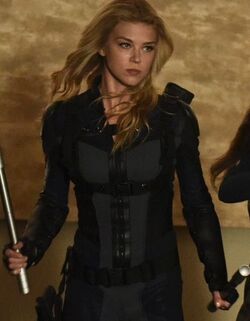 I'm not trying to steal her legacy, Clint. I'm trying to honor it. Why can't you see that?

Bobbi Morse was a S.H.I.E.L.D. Agent codenamed Mockingbird who helped fight against Apocalypse. When S.H.I.E.L.D. fell, Mockingbird joined several of her fellow agents in joining the Avengers. After the Black Widow was captured and imprisoned in the Sphinx, Bobbi stepped forward and took up her mantle.

After fighting alongside the Avengers for a few years, she led a squad consisting of Spider-Man, Ronin, and Rocket to a human death camp in Arizona in an attempt to liberate the prisoners. However, the mission went off the rails when the Archangel arrives. Once most of the prisoners are free, Black Widow orders her team to get them out safely while she holds off Archangel. The two engage in a short battle, as he quickly gains the upper hand and slashes her chest open with his wings, killing her. Her sacrifice was not in vain, however, as the Avengers were able to get the prisoner to safety.

Retrieved from "https://marvelcomicsfanon.fandom.com/wiki/Barbara_Morse_(Earth-9999)?oldid=246093"
Community content is available under CC-BY-SA unless otherwise noted.