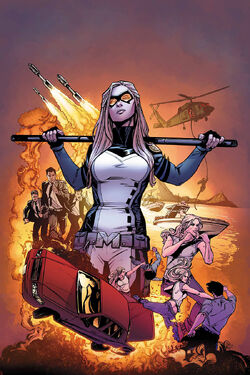 Excuse me, I can get back to you? We're still in the middle of a heroic gesture, on behalf of mankind...

Bobbi "Bobbi" Morse, famously codenamed Mockingbird, was a loyal agent of S.H.I.E.L.D. prior to the organization's temporary dissolution. She was once in a relationship with Lance Hunter, but their relationship had unfortunately ended after Lance intentionally left S.H.I.E.L.D. itself, in the guise of faking his own death during a mission at some point during the mid-1990s. She was later on recruited to be an Avenger in several specific missions, only a few weeks since its significant founding in the infamous Chitauri Invasion of the mischievous Loki Laufeyson in the late 2000s.

Around the time she worked at S.H.I.E.L.D. for almost a few years then at some point earlier in her adult life during the mid to late 1990s, she met and formed a romantic relationship with her fellow agent and frequent partner named Clint Barton who was also known by the codename of Hawkeye, whom the latter eventually proposed to her, despite the times that their different missions had caused them to be separated from time to time.

At some point after S.H.I.E.L.D. momentarily fell apart during the Hydra Uprising, the organization's new director after Nick Fury, Phil Coulson had Bobbi go undercover at Hydra as their new chief of security but she kept this secret from her teammates. He also had her keep an eye on Jemma Simmons, another S.H.I.E.L.D. agent working undercover as a scientist. Once Simmons' cover was blown, Bobbi revealed her true loyalties and took Simmons to the roof of the building they worked at, where an extraction team was waiting to take them back to the Playground. When S.H.I.E.L.D. had to face the Inhumans, Morse was kidnapped and tortured by the rogue agents and notorious Hydra agents, Kara Palamas and Grant Ward. She was eventually saved by both her then-current boyfriend Clint Barton and ex-boyfriend Lance Hunter, who has recently "come back from the dead" after revealing his unexpected survival and return to the agency.

Almost two months after the following events of the brief but brutal Ultron Offensive in the cities of New York and approximately three weeks before the Ultimate War, Bobbi and her now-fiancé Clint, decided to finally elope instead of getting married through a wedding, since they've realized that their lives gonna be full of "unexpected crap that's gonna come in their way," now that their ranks have been extremely increased as agents of S.H.I.E.L.D. since after all, they are now officially a married couple.

A few years later somewhere between the events after Civil War and before the Secret Invasion, the beloved couple eventually had conceived three lovely and wonderful children, the triplets whose named Cooper, Lewis, Nicole, and their youngest, Francis, whom they had raised, alongside Barbara's mother, Susan Morse, in Clint's Homestead which was located in the rural community, where they could live off the grid to avoid disturbances, scandals, and controversies among the face of the public eye and most of the authorities. Despite this, Clint and Bobbi would still continue their careers, both as Hawkeye and as Mockingbird respectively and as agents of S.H.I.E.L.D. and members of the Avengers, keeping the country and the entire world safe from every possible threats coming upon their way, and their entire family, which would be the couple's greatest responsibility aside from being agents of peace.

As Mockingbird, Bobbi possesses no superhuman abilities. Although, because of her abilities, Nick Fury's intel classified her as power level 7.

Retrieved from "https://marvelcomicsfanon.fandom.com/wiki/Barbara_Morse_(Earth-61615)?oldid=231073"
Community content is available under CC-BY-SA unless otherwise noted.