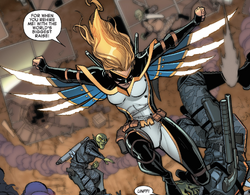 Alright look, we're not the Avengers, so I can't say assemble, but I can say get off your asses and let's move people!

Bobbi Morse always wanted to be a scientist growing up, and studied extensively to one day attend a good school. She was even accepted into the Georgia Institute of Technology, and began studying biology. However, before she could graduate, she ended up getting kidnapped and held for ransom, simply because she was beautiful.

However, Bobbi was not defenseless. She had taken Kung Fu and Karate classes as a child, and was eventually able to fight her way to freedom, which because a large local news story. This eventually attracted the attention of Nick Fury, Director of S.H.I.E.L.D., who offered her the job of a lifetime. She was then given a job in S.H.I.E.L.D.'s biology department, but felt something was lacking. She missed the feeling of adrenaline she felt while making her escape.

Fury agreed to have her trained for field duty, and she excelled right from the start. She eventually moved up to train with Hawkeye, who she even had a brief relationship with. She went on to be assigned a field duty group that would often provide support for Hawkeye in the field.

After Hawkeye and Black Widow leave S.H.I.E.L.D. to join the Avengers, Bobbi was Fury's first choice to graduate to a special ops agent. She was outfitted with a high tech outfit and the moniker of Mockingbird. She was eventually even promoted to the leader of the Secret Warriors, a team consisting of herself, Quake, Spider-Woman, and She-Hulk.

[[Category: In a Relationship with Lance Hunter Characters]]
Retrieved from "https://marvelcomicsfanon.fandom.com/wiki/Barbara_Morse_(Earth-101)?oldid=249040"
Community content is available under CC-BY-SA unless otherwise noted.