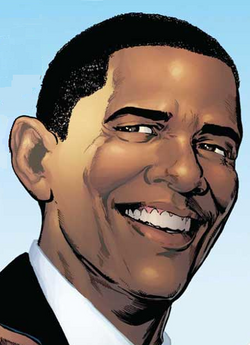 Earth-1010
Base Of Operations
The White House
Characteristics
Gender

Barack Hussein Obama II is the 44th and current President of the United States, and the first African American to hold the office. Born in Honolulu, Hawaii, Obama is a graduate of Columbia University and Harvard Law School, where he served as president of the Harvard Law Review. He was a community organizer in Chicago before earning his law degree. He worked as a civil rights attorney and taught constitutional law at the University of Chicago Law School from 1992 to 2004. He served three terms representing the 13th District in the Illinois Senate from 1997 to 2004, running unsuccessfully for the United States House of Representatives in 2000.

In 2004, Obama received national attention during his campaign to represent Illinois in the United States Senate with his victory in the March Democratic Party primary, his keynote address at the Democratic National Convention in July, and his election to the Senate in November. He began his presidential campaign in 2007 and, after a close primary campaign against Hillary Rodham Clinton in 2008, he won sufficient delegates in the Democratic Party primaries to receive the presidential nomination. He then defeated Republican nominee John McCain in the general election, and was inaugurated as president on January 20, 2009. Nine months after his election, Obama was named the 2009 Nobel Peace Prize laureate.

--Barack Obama responds to the return of Captain America

President Obama congratulated Captain America for his return in modern times, with an informal "Welcome back Cap" quote. The quote was made notable enough to be displayed at Captain America's exhibit in the Smithsonian Institution.

Obama was later targeted by Project Insight as an enemy of HYDRA, but the targeting Helicarriers were successfully destroyed by Captain America and his team. After the dissolution of S.H.I.E.L.D., many people began calling for the resignation of President Obama and discussed how he allowed a terrorist organization to become a member of the intelligence community. After the HYDRA attack on the United Nations Headquarters, the President said in an interview that the HYDRA crisis was "blown out of proportions".

Following the Battle against Ultron and the rise of Inhumans, President Obama authorized the formation of the Advanced Threat Containment Unit, the replacement for S.H.I.E.L.D., headed by Rosalind Price. A.T.C.U. was instructed to contain potential threats caused by people with superpowers. As the incidents became more and more public with Joey Gutierrez losing control of his powers in the middle of a city, President Obama had a press conference announcing his decision to the world.

Rosalind said you called them Inhumans. Heads of state are calling, not sure what's happening, watchdogs agencies hurling accusations, FOX News won't shut up! I don't need to tell you how delicate the situation is but we have to do something."
"With all due respect Mr. President, we are doing something.

Three months after the assassination of Rosalind Price at the hands of the HYDRA operative Grant Ward, President Obama met with S.H.I.E.L.D.'s current director Phil Coulson in Price's apartment to discuss their next course of action. Even though he couldn't openly reauthorize S.H.I.E.L.D., Obama trusted Price's judgement and decided to semi-legalize the outlawed agency to serve as the black ops unit against the advanced threats due to their superior knowledge.

At the same time, even though the Advanced Threat Containment Unit would publicly remain the Government's only task force to battle HYDRA and deal with the Inhumans, the agency's new director, although they had not yet been appointed, would receive orders directly from Coulson. When Coulson asked him to publicly condemn the HYDRA leader Gideon Malick for his participation in Price's murder, Obama replied that there was not enough evidence against Malick, and he was so powerful that even the US President could not take him down. However, working from the shadows, Coulson was given free range to do just that.

President Obama later contacted Director Coulson and Melinda May at their base at the Playground to inform them that he had named Major Glenn Talbot as the new head of the Advanced Threat Containment Unit. Although Coulson noted that Talbot would likely be unhappy with the move as the pair had previously been enemies during the HYDRA Uprising and they had never gotten along in the past, however Obama insisted that it was the right move as Talbot was a highly respected soldier and due to his time with S.H.I.E.L.D. he had experience with such threats.

Retrieved from "https://marvelcomicsfanon.fandom.com/wiki/Barack_Obama_(Earth-1010)?oldid=162173"
Community content is available under CC-BY-SA unless otherwise noted.