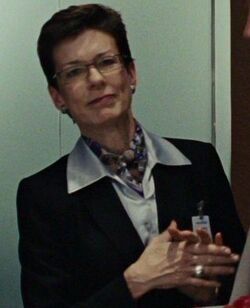 Shortly after the Duel of Los Angeles, Bambi Arbogast was hired at Stark Industries for Tony Stark as a receptionist. A few months later, when Pepper Potts became CEO of the company, Bambi became her secretary.

Bambi Arbogast was also responsible for the hiring of Natasha Romanoff under the alias Natalie Rushman. During and after the Stark Expo, Bambi kept her position as receptionist and secretary for Potts.

Two years later, Bambi was one of the many employees harassed by Happy Hogan, now head of security for Stark Industries, for not wearing their clearance badges. She maintained her duties as secretary and receptionist, alerting Pepper that Aldrich Killian, "her 4 o'clock," was there to see her.

Retrieved from "https://marvelcomicsfanon.fandom.com/wiki/Bambina_Arbogast_(Earth-1010)?oldid=124294"
Community content is available under CC-BY-SA unless otherwise noted.