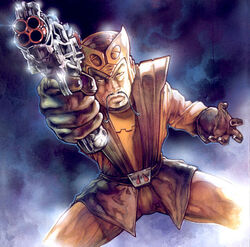 Baltag was the commander of Kang's elite guard, who rose against him after the invasion of King Carelius' realm, for not slaying Princess Ravonna, as the murder of all conquered monarchs was a common practice, in order to them from ever leading a rebellion. Baltag took control of the rest of the generals, who tried to assassinate Kang, but he teamed up with the Avengers and managed to squash the coup. As Kang was sending the Avengers back to their time, the defeated Baltag leapt out and fired a shot at Kang, but Ravonna leapt in the way and was shot herself. Baltag was eventually killed by Kang.

Retrieved from "https://marvelcomicsfanon.fandom.com/wiki/Baltag_(Earth-1010)?oldid=148541"
Community content is available under CC-BY-SA unless otherwise noted.