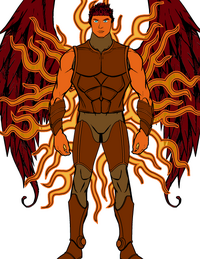 Balis is something of a first of his kind sort of deal, being the son of the Olympian God Apollo and a Shi'ar woman disguising herself as a human. In her human guise, she was able to catch the eye of the Sun God during one of his leisure trips to Earth and the two had a short romance, best described as a short love affair resulting in Balis. Once Apollo had to return to Olympus Balis's mother continued her observation of humanity for a time until she became more visibly pregnant and had to seek out a proper place to settle down. Buying a small apartment and having her egg, it wasn't long before Balis hatched appearing more human than Shi'ar much to his mother's relief.

For most of Balis' early life his mother made sure he was under the impression they were a normal human family but she decided to homeschool him largely due to the concern of his skin being more orange coloration than normal. Whenever they did go out she would lie that his coloration was an unusual skin condition that wasn't harmful but could have negative effects. Balis for a time believed his mother as well and continued his life as usual until about eight that he discovered some of his mother's Shi'ar weaponry and items. Confused, he inquired to his mother what the devices were much to her dismay but didn't hesitate to reveal her true appearance and explaining her reason being there in the first place.

Shocked but curious, Balis began to learn more about his Shi'ar heritage and began training with his mother in preparation to maybe someday go to Chandilar. During his spare time Balis also began to have some curiosity towards who his father was, which his mother was more reluctant to explain, instead encouraging to study more about Greek Mythology as a way to drop a hint. Doing so, Balis spent much of his time between training and his usual studies to look into Greek mythology, growing interested in several of the Gods and showing an interest towards Apollo. But seeing the exploits of heroes past and discovering his distant relative Hercules had been active once, Balis sought to become his own hero and began secretly working as a vigilante using his superhuman physiology and red wings alone, briefly taking on the codename of Apollo's Red Angel, or Red Angel for short.

By chance when Balis was fourteen, he would finally meet his father when he saved a seemingly old man from being mugged, actually being Apollo in disguise. When Apollo learned a little more about the naïve Balis at the time the Olympian revealed his true self and convinced the young Demi-god alien to take him to his home where his parents were reunited much to the annoyance of his mother. Though Balis learned the truth he realized his father had come to see his son for himself when hearing of his attempts of being a hero, showing some pride in it. But Apollo wasn't to stay, instead gifting his son with a gold and bronze bow and an amulet as a way to show his support before departing.

Following his father's leave and his mother's reluctant blessing, Balis began to expand his territory in helping others. During the next two years he slowly but gradually began to make Italy his place to protect, becoming Italy's Protector and changing his codename to Sol after discovering his Solar Energy manipulation and still in honor of his father. Balis also during this time made no effort to hide that he was in fact a demi-god, but hide his alien heritage merely passing off as having a gift from the gods while others seemed to question him potentially being a mutant.

Regardless of the public belief, Balis was eventually approached sometime before he turned seventeen by members of the Avengers, namely Arno Stark and Henry Pym when hearing of his reputation. Though unsure at first, Balis eventually accepted the offer and traveled with them to United States to join the Avengers Academy.

Balis has far greater strength then any human or shi'ar who engages in intensive exercise.

Equipment: Olympian-style armor, golden amulet given to him by his father
Transportation: His own wings, SHIELD vehicles
Weapons:

Retrieved from "https://marvelcomicsfanon.fandom.com/wiki/Balis_Vantellio_(Earth-7194)?oldid=163435"
Community content is available under CC-BY-SA unless otherwise noted.