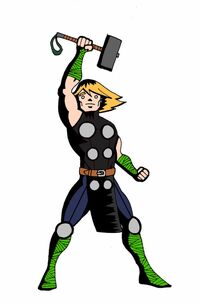 Thor and Enchantress had been in love for some time now, but something had to come of it. So, they decided to have a child. The same day, a major war was being fought. The day that Enchantress found out she was pregnant, Balder the Brave was killed in combat. Thor said, that if they were to have a son, they would name him Balder, for his fallen friend. And so it was, that Balder Thorson entered the world.

Growing up the Prince of Asgard, Balder was born with a silver spoon in his nose. If it wasn't the finest, is wasn't allowed for him. He didn't agree with this, but to challenge the Asgardian royalty when they were also your parents could end in no way but their way. So he just let it be. His closest friends were holograms that he made for himself. Life was lonely, but Asgard had lots of fun to offer. One day, Enchantress told him about the Seven Realms, and he decided fighting Frost Giants was a good way to go. He brought with him the fabled hammer of Mjolnir, and set out to kick some ice butt. He was doing well until his father showed up. After being yelled at, he realized he could no longer lift the hammer. He was sent home, and was punished, but eventually he fixed his mistakes.

He was told stories as a kid by his father; mainly tales of a group called the Avengers. He loved hearing of the foes his father faced on Midgard, and felt like he belonged there, but again, he could not ask. But when he had his mother help him view the present Avengers, he saw that they were reforming, but with children. He could easily recognize a chance when he saw it. He approached his father, asking if he could journey to Earth to observe the Avengers. His father agreed, saying it had been too long since Earth had seen an Asgardian. He was sent to act as an "ambassador" of sorts. Upon finding the Avengers, and the words "son of Thor" leaving his mouth, he was inducted into the group. He found joy in fighting alongside the newest heroes of the realm, that said, his father never gave him permission to fight.

Being an Asgardian, Balder has these abilities:

Tectonic Control: Due to his grandmother being Gaea, Balder has complete control of the Earth, and can create earthquakes by clapping, and can cause volcanic eruptions with a wave of his hand.

Odinforce: By tapping the Odinforce, and merging it with his mother's sorcery, he can achieve many effects:

Proficient Combatant: Odinforce is well-versed in the arts of combat.

Indomitable Will: Odinforce's will can't be bent to that of others.

Mental Resistance: All telepaths are injured upon trying to enter his mind.

Retrieved from "https://marvelcomicsfanon.fandom.com/wiki/Balder_Thorson_(Earth-1175)?oldid=163518"
Community content is available under CC-BY-SA unless otherwise noted.