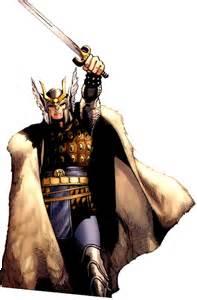 Little is known about Balder's life before the Masters of Evil's attack on Asgard. It can be assumed to be similar to his mainstream counterpart.

Balder, Heimdall, and Tyr were imprisoned during the Masters of Evil's attack on Asgard. Balder was guarded by the Enchantress and the Executioner, until he was freed by the Ultimate Alliance.

Is vulnerable to weapons made of mistletoe; can die of natural means (such as severe lack of food, water or air).

Equipment: Once wielded the Norn stones.
Transportation: Asgardian horses, occasionally inter-dimensional portals.
Weapons: Pair of swords. An Odin-blessed sword that Balder can summon from Earth across the Nine Realms to where he stands in Asgard and transport other beings to other realms.

Retrieved from "https://marvelcomicsfanon.fandom.com/wiki/Balder_Odinson_(Earth-6109.2)?oldid=201586"
Community content is available under CC-BY-SA unless otherwise noted.