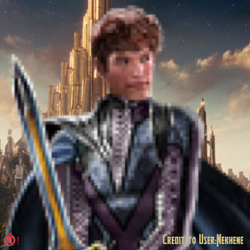 Baldur, Golden One, Annar, Balder the Loyal, the Gentle, the Bold, the true, the Protector, the Protector of all living things, Barry Landers
Identity

Single
Occupation
Deity; Prince of Asgard; Asgardian God of Light and Prophecy
Education
Trained Asgardian Warrior
Origin
Origin
Balder is one of the Asgardians once worshipped as a deity by the Vikings and Germans.
Place of Birth
Asgard
Creators

For ASGAAAARD! Fall ye back ---- before the blade of Balder!

Balder the Brave was one of the Asgardians, an extra-dimensional race of beings once worshiped by the Vikings and Germans, as well as younger brother and close friend to Thor. Due to prophecies that Balder's death would help trigger the coming of Ragnarok, the destruction of Asgard and its inhabitants, Odin, ruler of Asgard, commanded his wife Frigga to make Balder invulnerable to harm.

Frigga cast spells that would protect Balder form harm by any living or inanimate thing while he was in the Asgardian dimension; however, Balder remained vulnerable to mistletoe. Loki, the god of mischief, learned of the prophecies and vulnerability, and tricked the blind god Hoder into firing an arrow tipped with mistletoe wood at Balder. Odin prevented Balder from actually dying.

Skilled warrior and horseman, Balder is also a capable leader and swordsman

Superhuman class 50. Balder is significantly stronger than the average Asgardian and can lift 35 tons.

Is vulnerable to weapons made of mistletoe; can die of natural means (such as severe lack of food, water or air)

Equipment: Once wielded the Norn stones.
Transportation: Asgardian horses, occasionally inter-dimensional portals.
Weapons: An Odin-blessed sword that Balder can summon from Earth across the Nine Realms to where he stands in Asgard and transport other beings to other realms called "Frigga's Hope".

Retrieved from "https://marvelcomicsfanon.fandom.com/wiki/Balder_Odinson_(Earth-1010)?oldid=104747"
Community content is available under CC-BY-SA unless otherwise noted.