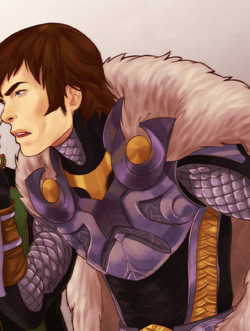 The internal matters of the crown are of little interest to me. My priorities are more devoted to the wellbeing of the people affected by our family's endless source of drama.

Balder is the second born son of Allfather Odin and his wife, Freyja. Growing up, Balder and his brothers did not get along very well, as each of them felt they were competing for their parents' affection. When Balder and Thor matured and became more involved in the Asgardian militia, they found common ground and ended up becoming close.

After Thor was banished to Midgard, Balder was convinced by their other brother, Loki, that the crown would fall to him, and that he should spend time among the other Nine Realms to get acquainted with his kingdom. Balder agreed, and decided to go trekking through the Realms by himself as a nomad and good samaritan wherever he was needed. Eventually, however, Loki's ruse was revealed and Thor returned to Asgard, but ended up turning over rule back to their father, and Balder himself.

But Balder had found that during his time out in the realms what they needed was not a king, but a defender. While Thor dedicated himself to Midgard, Balder offered his immediate services to protect the other realms from whatever threats may face them.

When Odin's brother and Balder's uncle, the Serpent, rose from his imprisonment in the Isle of Silence, the Nine Realms fell into chaos. While the majority of the fighting ended up taking place on Midgard, Balder became overwhelmed with his duties among the other realms. So much so that he was powerless to stop his father's death and the fall of Asgard. This resulted in him turning over the crown to Thor, so that he could reestablish Asgard on Earth. Balder agreed to follow his lead, but still opted to spend most of his time making sure the other realms were well kept.

[[Category: In a Relationship with Sif Characters]]
Retrieved from "https://marvelcomicsfanon.fandom.com/wiki/Balder_Odinson_(Earth-101)?oldid=250171"
Community content is available under CC-BY-SA unless otherwise noted.