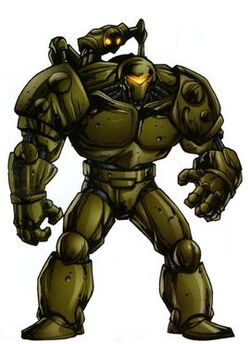 Little is known about Warstar's past before A.I.M. got their hands on them. It can be assumed to be similar to their mainstream counterparts.

At some point, Warstar found themselves captured and somehow reprogrammed by A.I.M. to aid them in the destruction of the Omega Base, but them and the organization were defeated by Wolverine.

After Deathbird's coup d'tat against her sister, Queen Lilandra, Warstar were partnered with Starbolt to guard the force-field generator outside the ship transporting Lilandra to the Shi'ar homeworld. However, all three were defeated by the Ultimate Alliance. Since they never stated whether they were part of the Guardsmen that sided with Deathbird in taking the throne, the duo's fate is unknown.

Equipment: None known.
Transportation: Flight patch, an anti-gravity device enabling them to fly
Weapons: None known.

Retrieved from "https://marvelcomicsfanon.fandom.com/wiki/B%27nee_and_C%27cil_(Earth-6109.2)?oldid=154776"
Community content is available under CC-BY-SA unless otherwise noted.