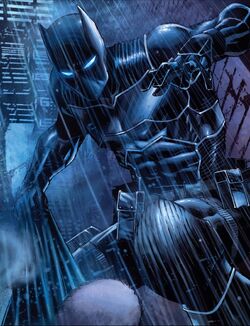 You're not the Black Panther, I am!

Azari T'Challa is the son of Wakandan king T'Challa known as the Black Panther and the mutant Ororo Monroe known as Storm. He was born during the traumatizing days of the event known as the "Ultron Revolution," when he had no other choice but to live in an underground city in Wakanda, developed by his father, similar to the New York Underground Megacity built by the Stark in the United States. Before his parents and Wakanda itself had fallen fighting for Earth's freedom against Ultron, he was taken to safety by Iron Man and other surviving heroes alongside with James Rogers, Torunn and Henry Pym Jr. to keep them all safe from the hands of Ultron. Azari along with his other siblings only knew of the Avengers and other superheroes through Tony's tales of their former glory days.

Growing up after the Ultron Revolution, he and his several companions as a child voluntarily joined the Resistance along with their newfound ally and friend Francis Barton and were trained by the previous and retired heroes so that then one day, they'll be prepared to help them against the tyrannical empire of Edward Stark and take back humanity's freedom once again. During the last days of the final war against the Empire, he was finally ready to put on the suit of succession and was able took on the mantle of his father, becoming the all-new Black Panther of the newest team known as the Next Avengers.

Retrieved from "https://marvelcomicsfanon.fandom.com/wiki/Azari_T%27Challa_(Earth-61616)?oldid=267975"
Community content is available under CC-BY-SA unless otherwise noted.