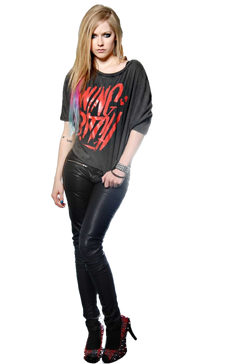 At some point of her life, she was turned into a vampire by Dracula. This didn't stop her musical career, as she continued to play gigs and release music. However, this affected her relationship with her fans, since she couldn't go outside during daytime and getting too close to her admirers would give her the urge of feeding on them.

Vampirism: After being bitten by Dracula, Avril Lavigne is currently a vampire with full vampiric powers, including:

Avril Lavigne possessed most of the same special vulnerabilities common to vampires:

Retrieved from "https://marvelcomicsfanon.fandom.com/wiki/Avril_Lavigne_(Earth-1010)?oldid=255084"
Community content is available under CC-BY-SA unless otherwise noted.