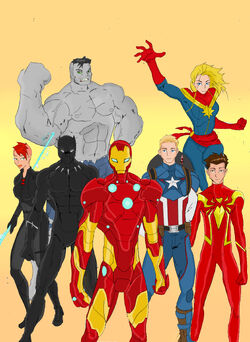 After the Fantastic Four's reveal to the world and the ever growing population and potential threats of mutants and enhanced humans, S.H.I.E.L.D. created the Avengers Initiative; emergency response team and a collection of enhanced individuals to defend Earth from imminent global threats that would prove so powerful, that no one hero could face it alone. Director Nick Fury was chosen as the liaison between S.H.I.E.L.D. and the new group. He often acted as the group's leader. Nick Fury created a dossier of all of his candidates to join the team, those individuals were; Iron Man, Thor, Captain America, Ant-Man, Wasp, Hawkeye and Black Widow.

The team found themselves in humanity's old war against the shape shifting alien race, the Skrulls, and eventually discovers that the Skrull's super weapon is a bomb that will kill all metahumans on Earth, with millions of collateral human casualties. Thor prevented the bomb from detonating and the rest of the team successfully save the Earth and the Solar System. After the defeat of the Skrulls, the Avengers are then immediately praised as heroes by the world.

Six months later after the Avengers made their remarkable debut saving the planet and with the rising threat of Hydra after the events of Red Winter a year later, the Avengers reassembled and had been serving the United States government as part of its "police" force in the War on Terror, thus alienating the entire international community and forming an alliance with the European Super-Soldier Initiative (also known as Excalibur) to ensure world peace and met new allies along the way, including T'Challa, the new king of Wakanda and warrior known as Black Panther and Brian Braddock, also known as the superpowered Captain Britain. Using the new drones developed by Hank Pym called the Iron Legion, they also embarked on several missions to destroy Hydra's plans for world domination. Their main target was the cell of Wolfgang von Strucker, which was in possession of a powerful infinity gem known as the Power Stone.

When Black Widow intercepted a call from Justin Hammer the Avengers quickly flew in their Quinjet to the location of Hammer's lab. Though Hydra managed to shoot down the Quinjet, the Avengers fiercely attacked Hydra's soldiers. Despite their tanks, guns, and numerical superiority, Hydra soldiers decided to retreat. Refusing to admit defeat, Hammer activated a giant robot dubbed Ultimo MK II and attacked the Avengers, but it was quickly destroyed by the Avengers own giant mech robot consisted of several extremely powerful combat vehicles fused together dubbed "The Ultimate Iron Man MK I" and Hammer was taken in by SHIELD for interrogation.

Thanks to information acquired by Hammer, the Avengers were able to finally locate the Power Stone in Transia, a small country in Europe. The team then launched an all out assault to recover it. The team fought as a unit, using skilled combat techniques which complemented each other's fighting styles. This synergy, coupled with their abilities and equipment, gave them a decisive advantage over the Hydra forces. Together with Pym's Iron Legion in the field of battle, the team soon overthrew the Hydra soldiers, apprehended their weapons maker Phineas Mason and reclaimed the infinity Gem.

The team also suffered internal conflicts and problems: The Hulk was mysteriously mind controlled and was seen rampaging in New York and Thor being labeled as a insane person and then imprisoned by his own teammates after fighting them. It is then revealed that the cause of the ruination of Hulk and Thor was due to a traitor among the Avengers, the Black Widow, who was blackmailed by her thought to be dead ex-husband Nikolai Krylenko, now known as the Red Guardian, into betraying the group in order to leave the American nation open to attack from the Thunderguard.

In doing so to further cripple the Avengers from within, she was forced to shoot her partner Hawkeye in the back and framed Captain America for a crime he didn't commit. Tony Stark tracked her down and took her back to SHIELD for questioning. Immediately afterword, the Thunderguard damaged the Triskelion, and captured almost all of America's superheroes and the Avengers. Thanks to her ability to move undetected, the Wasp freed the Avengers and were able to counterattack against the Thunderguard.

Eventually, as the remaining members were defeated by the Avengers, the god of mischief Loki appeared before them who revealed that he conspired with the Thunderguard to destroy the Avengers and start World War III per his role as god of mischief. He also orchestrated the events prior thanks to his reality manipulating powers. Loki then uses the Norn Stones on the Avengers and teleported them to seven of the Nine Realms. As they were separated, they fought their way out and made friends with Asgardians, even helping them fight Loki's forces.

On Asgard, they fought their way against evil forces and then confronted him. They defeated Loki by delaying him long enough for the others to find a way to take the Odinforce away from Loki. The Asgardians hailed them as true heroes and returned them back to Earth. After their intense battle with the Thunderguard and Loki, China and Russia distanced themselves from having any links with the Thunderguard and stated they would aid a war-torn America and proceed with a "full investigation" of the Thunderguard.

Meanwhile, the Avengers, having experienced that working with the U.S. government and its resulted upbringing was not worth fighting for, decided to leave S.H.I.E.L.D., and continued to work as a independent superhero team instead. The Avengers had the financial backing of Tony Stark. Using the former Stark Tower, now renamed Avengers Tower as their new headquarters. Natasha was able to regain trust from the Avengers, meanwhile, the group's mistrust in Banner became apparent when he was manipulated by Loki, prompting the Hulk to quit the team.

After the Skrull Invasion, the Kree soon became a bigger threat to the Avengers. After the defeat of Yon-Rogg by newcomer Ms. Marvel and her partner Captain Mar-Vell in foiling his attempts to take over Earth, they sent several ships to Earth's solar system. One attacked the Triskelion and one opened up a wormhole by the sun. With the help of Captain Mar-Vell and Ms. Marvel, the Avengers used a Quinjet to travel to the sun. There they discovered that the machines generating the wormhole were located inside the wormhole and made a daring move. On the other side of the wormhole, they faced a massive fleet of Kree warships.

They crashed onto the Kree's home world and fought wild beasts and later the Supreme Intelligence. Mar-Vell begged the Supreme Intelligence to spare humanity as they could teach the Kree so much and showed him, Ms. Marvel, Captain America and Wasp as examples of what humans could do. The Intelligence ordered the humans dissected for study and Mar-Vell executed for his crimes. The Avengers regrouped, rescued their comrades, and fought Ronan the Accuser. They defeated him and Captain Mar-Vell became the new leader of the Kree Empire. The Avengers then returned to Earth, and recruited Ms. Marvel as a new member of the team.

Weeks later, a strange man named Michael Korvac landed in Central Park, creating a crater, claiming to be pursued by aliens. The police took him to the Avengers. After Wasp brought his wife, Carina Walters, to Avengers Tower to be with him, the Guardians of the Galaxy appeared in search of Korvac for his crimes against the galaxy. Hearing Michael Korvac's pleas, the Avengers fought the Guardians as Michael escaped along with Wasp and Carina. When the Guardians explained to the Avengers the threat Korvac represented to the universe, his powers manifested and he knocked out everyone present but Carina. He escaped with her, and Ms. Marvel pursued them while the Guardians introduced themselves and explained their reasons for capturing Korvac. After that, the team decided to help them apprehend the mad-crazed cosmic being. Despite their best efforts, they were easily defeated by Michael until Carina was able to help Korvac come to his senses, which led to his self-exile in the unknown reaches of cold space.

Since Korvac's gone, Iron Man wanted the Guardians to tell them everything what other threats they encountered and known in the galaxy, but Star-Lord preferred not to tell them, saying: "There are things out there in the universe you're better off not knowing about." The Guardians then offered to help the Avengers with any other problem they might face in the future before leaving Earth to deal with other threats.

Malekith was the leader of the Dark Elves of Svartalfheim, one of the Nine Realms. After Malekith was able to obtain the Casket of Ancient Winters, he decided to conquer Midgard by creating a state of Eternal Winter with the help of the Casket's power and his army of Frost Giants and Dark Elves. Thor, his sister Angela, Iron Man, and Black Panther then encountered Malekith. After freezing Thor, Malekith stated that his plan was to release the dead Dark Elves and make Midgard their new home.

Through the battle, Iron Man was able to free Thor from the ice as he attacked Malekith. The Avengers, with advice from Black Panther, attempted to combine their powers of magic and science; Thor used Mjolnir to electrify Iron Man's armor to take down Malekith. Thor then closed the Casket, reversing its effects across the planet. But before they could secure the Casket, Enchantress and Executioner thawed out and stole it, disappearing with her magic.

At some point, a version of Clint Barton from a parallel Earth came to the Avengers' reality for help to fight their evil counterparts. He told them about the existence of a fascist parallel universe that could threaten the safety of their own world. This universe was known as Earth-H, a dystopian world ruled by Hydra. They teamed up with the Fantastic Four, Spider-Man, the X-Men, and S.H.I.E.L.D. The heroes then traveled to Earth-H in order to battle their evil counterparts and destroyed their doomsday device that could've wiped out the entire Multiverse. They made allies with the Liberty Legion; an underground resistance of superheroes working to oppose the Hydra empire, as well as with Nova along the way.

The heroes returned to Earth-981, and Wasp, Betty Ross, Ms. Marvel, and the others were rescued by the returned heroes and the Guardians of the Galaxy. However, their victory was costly, as Nightcrawler of the X-Men was killed in battle while trying to save Rogue from Hydra Supreme. His death spurred the heroes to declare war on Earth-H's Hydra forces. When Hydra attacked Washington D.C., the heroes countered their assault and defeated the invaders. Captain Hydra's solar radiation went nuclear, and Ms. Marvel carried her into space, where the former explodes. After Wagner's funeral, Nova was offered a spot on the Avengers, but he refused the offer and returned to Earth-H to continue to help the resistance.

More to be added

Retrieved from "https://marvelcomicsfanon.fandom.com/wiki/Avengers_(Earth-981)?oldid=254425"
Community content is available under CC-BY-SA unless otherwise noted.