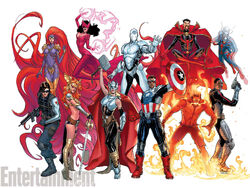 We may not always see eye to eye, but we work well together.

A new group of Avengers were assembled due to the death of some former members, or the passing on of legacy's to others.

Medusa: Once queen of the Inhumans, Medusa now leads the Avengers.

Iron Man: Second in command of the new Avengers team.

Sam Wilson: Now Captain America after Steve passes on his legacy to him.

Angela: The Huntress of Asgard, now on the Avengers team, and hunting villains for fun.

Scarlet Witch: After the events of her dark Avengers, Wanda took a long hiatus before returning to the team after Steve's retirement.

Steven Strange: Doctor Strange has joined the Avengers in order to help against the forces of darkness.

Hank Pym: Ant-Man joined the team in order to act as their adviser, and to test his new projects.

Dante Pertuz: Inferno, following his queen, has joined the Avengers, vowing to protect Medusa at all costs, though she insists she doesn't need it.

Henry Hayes: Deathlok, now on the side of good, helps the Avengers with his many weapons of destruction.
Add a photo to this gallery

Equipment: Suits, Helmets and other items of the group.
Transportation: Quinjet, Helicarrier
Weapons: Any weapons required by certain members. (Within reason.)

Retrieved from "https://marvelcomicsfanon.fandom.com/wiki/Avengers_(Earth-88)?oldid=105870"
Community content is available under CC-BY-SA unless otherwise noted.