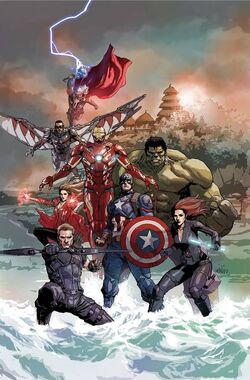 The Avengers Initiative was a secret project created by S.H.I.E.L.D. to create the Avengers, a collection of the most able individuals to defend Earth from imminent global threats; these individuals functioning as a response team to said threats that are too great for the forces of mankind to handle. At some point in time shortly before the members were gathered by Nick Fury to warn them of Loki's arrival on Earth, a few days before the destruction of Project P.E.G.A.S.U.S., one of the heroes, the supreme scientist Hank Pym, was just finishing activating his planned A.I. peace-keeping program through the usage of the Tesseract, he decided to call "Ultron."

Possessing multiple host bodies under his control, as well as a variant of Pym's own personality, Ultron was unintentionally activated by the lightning strike summoned by Thor's mighty hammer, who was looking to take Loki from the Avengers, while Pym was carrying a containment device containing an inactivate Ultron inside the Quinjet, originally on their way to the S.H.I.E.L.D. Helicarrier. As a result, Ultron was finally born, much to the surprise of his creator. The being was initially confused and attacked Thor, who defended himself by launching his attacker through the air, however the being paused and calmed down, after processing his own system that he was programmed to fight to protect humanity at all costs by assisting as the Avengers' technological support in taking down Loki, having possessed the personality of his creator.

A few days later during the first meeting of the Avengers, Ultron was finally given his own synthetic body, courtesy of Tony Stark's tech. Unfortunately, Ultron then flew away from his synthetic body into the Internet (only minutes after Loki had escaped), afraid and confused when he first felt sensation and "emotions" after viewing S.H.I.E.L.D.'s history and actions as devastating to the human race, along with his first existential crisis, questioning his purpose only as a tech support for a team supervised by an organization with a very-complicated history he discovered, but never revealed to anyone.

His body was eventually reactivated during the Chitauri Invasion caused by the diabolical Asgardian God of Mischief Loki, with its success leading to the formation of the newly-established Avengers. The Avengers were a team of powerful superheroes assembled by Nick Fury and S.H.I.E.L.D. through the Avengers Initiative, as a team that could fight evil that they could never handle alone.

During the notorious Battle of New York, the Avengers were close to averting the incoming attacks of the Chitauri fleet that flew through the wormhole activated by the power energy of the Scepter, until it was revealed that Loki had strategically deceived the heroes through illusion-casting, showing that they were actually fighting a mirage created by Loki.

As a devastating consequence of his effective strategy, the invasion of the timeline itself was prolonged for more than a few weeks, longer than it was supposed to be. In the wake of the conflict, more and more massive Chitauri fleets entered the still-active wormhole, along with the arrival of another far more aggressive race also led by Loki, known as the Outriders, unleashing chaos and destruction throughout the rest of United States in a matter of seven days. Seeing as the situation got even worse than before, the heroes, along with several other heroes, had no other choice but to help the citizens of every city in the country evacuate to safety as they continued defending them from the incoming attacks for the following days, lasting for almost a week.

Thankfully, the extended conflict was miraculously averted after the noble sacrifice and redemption of Ultron (who first felt love and affection after briefly meeting the secret heroine named Wanda Maximoff), when he successfully destroyed both the cosmic stone inside the Scepter (after using it to close the portal) and somehow the Tesseract afterwards, and thus the rest of the heroes were able to decimate what was left of the alien threat, foiling their attempted invasion of Earth and unknowingly saving the entirety of the universe from the clutches of the true mastermind's quest to obtaining the Infinity Stones, much to his dismay and disappointment in Loki's failure.

After saving the world in the battle of New York using their combined might and effort, they gained world-wide recognition, being referred to as "Earth's Mightiest Heroes" by many people. The Avengers were also praised and supported by most of the government-sponsored enterprises and most of the people and organizations all over the world, for saving the world. Eventually, motivated by the Avengers' success, the United Nations began to field authorized superhumans in international conflicts. Due to Ultron's selfless sacrifice in the finale of the conflict, he was given a public recognition as a honorary Avenger, assuring the whole world that his significant sacrifice would never be forgotten by the billions of lives he saved in the process.

Days after the end of the Chitauri Conflict, Pym and Stark successfully accessed the secret archives stored by Ultron right before his death, revealing to all of S.H.I.E.L.D.'s deepest, darkest secrets, including the fact that the organization had been the host of the ancient paramilitary organization known as Hydra. Along with it, the files themselves were timely programmed to be released all over the internet in the next fifty-four hours, much to the two's shocked and surprised reactions, with Pym pressured to figure out how to stop it, while Stark was last seen confronting Fury inside his office, furiously questioning him what the files were about, much to Fury's sincere confusion as to what he meant.

Retrieved from "https://marvelcomicsfanon.fandom.com/wiki/Avengers_(Earth-61615.8)?oldid=233994"
Community content is available under CC-BY-SA unless otherwise noted.