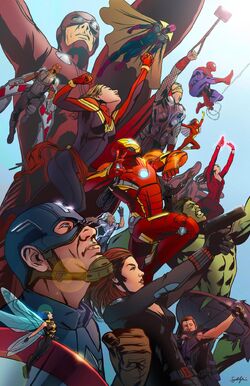 The Avengers Initiative was a secret project created by S.H.I.E.L.D. to create the Avengers, a collection of the most able individuals to defend Earth from imminent global threats; these individuals functioning as a response team to said threats that are which too great for the forces of mankind to handle.

It was eventually reactivated during the Chitauri Invasion, with it's success leading to the formation of the newly-established Avengers. The Avengers were a team of powerful superheroes assembled by Nick Fury and S.H.I.E.L.D through the same Avengers Initiative project as a team that could fight evil that they could never handle alone. After saving the world in the battle of New York with the help of the Defenders, they gained world-wide recognition, being referred to as the "Earth's Mightiest Heroes" by many people.

Stark Industries remodeled Stark Tower into Avengers Tower and the team joined the fight against the rising Hydra. After they finished the war, Hank Pym built Ultron hoping that the AI would be able to defend the world from any threats necessary. The plan backfired and Ultron started a war against humanity, ending with Ultron's defeat. When Ultron was defeated, the team gained new recruits including Vision, Ultron's creation and so-called "son," whom he unexpectedly created for himself a new body. On that day, the Avengers were reborn, to fight every mighty foe no single super hero could withstand! Heed the call, from then on and for now, the "Avengers Assemble!"

Under Captain America and Iron Man's leadership, the team successfully completed some, if not, most missions, though as time goes on, even more threats and situations, have been growing throughout the entire globe, worse and worse. From the destruction caused by the manipulated Unstoppable, Savage Hulk and the resurgence of Ultimate Ultron after his return, to the rise of terrorist, criminal organization and institutions, the Avengers realized and felt that they could no longer handle these incoming threats, by just themselves alone. As a result, the superhero joint, known as the Ultimates, were successfully formed, uniting the joint forces of the mightiest superteams on Earth in order to protect Earth from extraterrestrial and international threats no single superhero team or even a legion of army could defeat.

During the events of Ultimate War, the Avengers along with several superhero and other super-powered troupes around the world, unfortunately became disbanded after the series of unfortunate events caused by the movement of the overpowered international villain league, known as the "Alliance," led by Hydra, Mister Sinister's Brotherhood of Supremacy, the Liberators, and so much more lawbreakers and wrongdoers, that the heroes were fighting against.

After these following traumatic and destructive events, the Avengers remained disassembled, going through a momentary hiatus for a few years due to the events caused by the controversial Superhuman Registration Act, which led to the chaotic event, known as Civil War. The Civil War has caused the disclosure and disbandment of several super-powered individuals to sign the accords, creating two divisions who were supporting the act, led by the Iron Man, and those who were against it, led by the now-fugitive Captain America.

Thankfully, the Avengers managed to bury their hatchets and eventually had the chance to reassemble once again after the fall and discontinuation of the Registration Act, due to the serious events caused by the Secret Invasion of the Skrulls, in order to keep the entire community of the world safe and sound from these kind of dangers, not even the united authorities can fully handle, not without their help to save the day anytime.

In the aftermath of their all-out victory against the most notorious cosmic threats, including the Skrulls, the Mad Titan Thanos, and the more diabolical Magus in order to save the fate of the universe itself using the legendary Infinity Gauntlet, the Avengers was praised by the public more than ever before, and with it, the latter finally becomes a global organization publicly funded by none other than Tony Stark himself, who was responsible for suggesting and persuading the President of the United States and the entirety of the United Nations to implement the public program he had secretly proposed for so long as a replacement for the Superhuman Registration Act, known as the Avengers International.

In response to Stark's convincing proposal, the heads of the United Nations had gleefully ratified the project, and had the Avengers International finally announced throughout the whole globe as a publicly-sponsored super-hero initiative. They are established to protect the Earth and restore faith in its government after most of it supposedly fell during and after Norman Osborn's Dark Reign, using the recently built New Avengers Facility as their headquarters. Expanding the new roster of the Earth's Mightiest Heroes, the team grew farther than what the original members had already anticipated, after Stark and Rogers came to recruit their newest members, with each one as a honorable representative from their home countries, who were brave, inspired, and selfless enough to join their organization and become a mighty Avenger.

Having completed their first few missions around the globe successfully, Stark and Rogers appeal to the U.N. and they are finally given official, public support. However, little did the heroes realize, was that as their recognition grew stronger and stronger all over the world, the same thing happened with their adversaries that they had faced before, gaining the attention of insane geniuses, rising terrorist organizations, more extraterrestrial colonizers, interdimensional entities, and several others who would do anything just to get in their way and prevent the heroes from thwarting their diabolical schemes.

For the next few years during the significant Heroic Age, the Avengers International became a successful worldwide heroic organization, continuing their obligations to battle out every single evil that no single hero could ever defeat. Unfortunately, since all things, both good and bad, eventually come to an end as one would expect, the now renowned Avengers International had to face its ultimate end, right at the end of the Heroic Age, and the beginning of the "Ends of the Earth." During the Ends of the Earth, each of the Avengers were slowly torn apart by the disastrous events inflicted upon them at the time, to the point where most of its once enthusiastic members were devastated and extremely traumatized by the massive loss they just endured, including a great one from their own. This loss came after clashing against their last known enemies as a publicly-supported team, A.I.M., in Chicago, led by the insanely powerful Graviton and the evil genius, M.O.D.O.K.

In response to this life-changing experience that left the Avengers broken for a long while, a very sympathetic Tony Stark decided to find a way to resolve their serious recurring problem and help his teammates recover since the heroic death of one of their greatest comrades, though as the new President of the United States, Larry Trask, was finally elected, Stark was too late to bring the broken team back together. Since the new President convinced the U.N. that the superhumans have become too much reckless and uncontrollable since the events of Mutant Ultimatum and the Battle of Chicago, the U.N. decided they had no other choice but to dismantle the Avengers International, once and for all. However, despite the fact that it was the end for the international team, the spirit of the Avengers itself lived on otherwise, and with the original roster reforming, not even the new authorities could stop them from voluntarily taking down evil forces and most importantly, saving lives in the process.