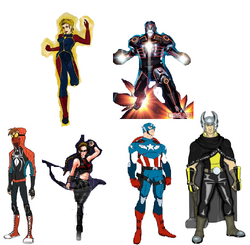 We are Earth's Mightiest Heroes...whenever anyone or anything dares to threaten the peace and the lives of the people of our planet...we will be there to fight, to prevail, to let everyone know that no one shall go through our planet with hostile intentions until they go through us first.

The team was created after S.H.I.E.L.D. Director Phil Coulson activated the Avengers Project under orders of United States President Nick Fury after the Super Soldier Project was shelved, even though it found success after testing it on a fallen Tier 1 Soldier

The team started once Coulson revived Steve Rogers through the "Super Soldier Project". Rogers accepted to join the new Avengers team and become its leader on the condition that he supervised the program, to which Coulson agreed. Rogers decided to discard S.H.I.E.L.D. agents for the moment, since the focus on the team is the superhuman aspect of the members. The first choice was industrialist Tony Stark, who just went through an accident with his arc reactor. After consulting his father about the situation, Rogers decides to convince Tony to join the team, and he became Iron Laser.

Members from Off the Earth

Two other members came from outside the planet. The first one to joint was Thor, the Asgardian God of Thunder of Norse Mythology, who was found in Norway by the European United Council. Rogers assisted Thor in battle against an army of Ice Giants led by Ikol.

The second member was Kree scout Kah-Rehl, who adopted the name of Carol Danvers thanks to the assistance of her friend and S.H.I.E.L.D. Agent Jessica Drew.

Youth of the Nation

The last two members of the team were younger than the rest. First was Christina Barton, daughter of U.S. Senator Clint Barton, who is an old friend of Coulson and requested her inclusion. Rogers agreed on the condition she receives proper training. The last member of the team was selected by Rogers himself, high-school scientific prodigy Peter Parker. Coulson had his doubts about his inclusion, but Rogers remarked that it's his team and that he trusts in Peter, because of all the members, he carries the greatest potential to become the best of them all.

Retrieved from "https://marvelcomicsfanon.fandom.com/wiki/Avengers_(Earth-120986)?oldid=153486"
Community content is available under CC-BY-SA unless otherwise noted.