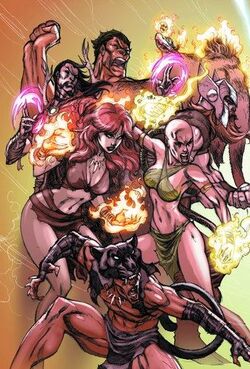 The origin of the Avengers (1,000,000 B.C.) is unknown, but Bashenga claimed that it was formed to fight off threats.

At some point, the Dark Phoenix's influence took over Phoenix and she killed Ghost Rider's mammoth and Iron Fist. Jean Grey witnessed a flashback of her past life, in which she faced the Avengers of the Stone Age.[1]

Retrieved from "https://marvelcomicsfanon.fandom.com/wiki/Avengers_(1,000,000_B.C.)_(Earth-1010)?oldid=204712"
Community content is available under CC-BY-SA unless otherwise noted.