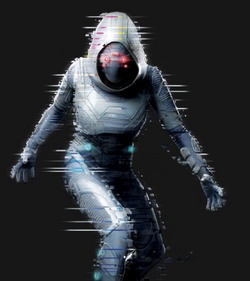 Every day every molecule in my body is torn apart and stitched back together. You can't imagine my pain.

The daughter of mad scientist Elias Starr, Ava was forever changed during the lab experiment that claimed her parents' lives. Ava discovered her molecular structure had been altered, leaving her to forever be phasing between tangibility and intangibility.

Her father's organization, the Advanced Idea Mechanics, promised Ava they would help cure her. However, they instead began using her abilities to their advantage by sending her on stealth and black ops missions. Over the years, Ava began to feel like she wasn't even a person anymore, just a hollow shell to be pointed at a target for her to kill.

Eventually, the Avengers Ant-Man and the Wasp discovered her mutation was caused by Quantum energy, the same thing that fuels their Pym Particles. Wasp became dedicated to helping cure Ava, but she had lost all trust in people. She was led to believe by AIM that they were developing a way to completely disintegrate her, trapping her soul in the Quantum Realm for eternity.

However, after working alongside AIM for a few years, Ant-Man and the Wasp managed to get through to her. She was able to see the truth, and turned herself in during the fall of AIM. However, due to her willingness to comply, she was the perfect candidate for the Thunderbolts Program, which took apprehended criminals and attempted to turn them into civil servants by placing them on a strike team that would work under the Avengers and be supervised by General Thaddeus Ross.

Retrieved from "https://marvelcomicsfanon.fandom.com/wiki/Ava_Starr_(Earth-101)?oldid=250539"
Community content is available under CC-BY-SA unless otherwise noted.