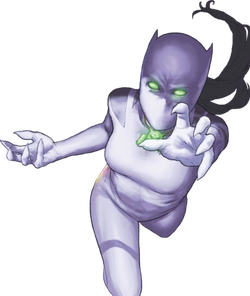 Growing up, Ava Ayala was taught a simple truth by her family. Magic was real, and it flowed throughout the world waiting to be grasped and mastered by humans.

She was also given the amulet of her family, which mystically linked her to a mystical tiger entity. With this amulet, Ava had the martial prowess of all previous White Tigers and augmented physical capabilities.

After she turned 15, Ava donned a uniform and continued her family tradition of defending the innocent and facing off against evil sorcerers as the White Tiger; during her adventures Ava came to know her fellow New York superheroes Spider-Man, Silk, Iron Fist.

Two years into her career, New York City was invaded by the combined forces of A.I.M and Hydra. Faced with this threat and with the Avengers off-planet, White Tiger allied with several other known local heroes and Ken Cavill, the future Sentry. Together they managed to repel the invasion, with Iron Fist suggesting the group band together as their own super-team.

Equipment: White Tiger Amulet: A mystical artifact held by her family, this jade amulet grants Ava powers beyond human potential as long as she has it within 3 feet of her body.
Transportation: None known.
Weapons: Claws

Retrieved from "https://marvelcomicsfanon.fandom.com/wiki/Ava_Ayala_(Earth-42180)?oldid=209714"
Community content is available under CC-BY-SA unless otherwise noted.