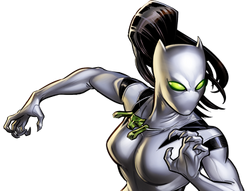 Ava Ayala, alias White Tiger her powers came from the White Tiger Amulet, inherited from her father, Hector Ayala, who inherited it from his. He had been tracked and killed by Sergei Kravinoff. She attends Midtown High School along with Luke Cage Iron Fist (Danny Rand), Spider-Man (Peter Parker) and Nova (Sam Alexander).

She must constantly keep herself focused and disciplined in order to keep the tiger side the amulet bestows in check to prevent going feral.

Retrieved from "https://marvelcomicsfanon.fandom.com/wiki/Ava_Ayala_(Earth-1010)?oldid=131335"
Community content is available under CC-BY-SA unless otherwise noted.