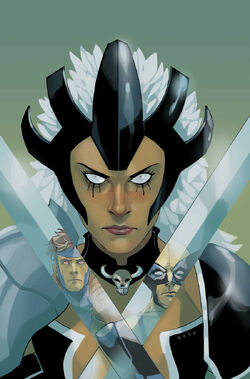 First appearance
I Lost My Heart to a Starship Trooper

My name is Ava'Dara Naganandini. Soldier of the Shi'ar Imperium. Royal Warbird. Deathbringer class. I know the way of the Shi'ar. I know how to kill.

Ava'Dara Naganandini's origins are the same as those of her Earth-616 counterpart.

At one point of her life, she was taken in as a prisoner by Kasius, making her one of his slaves alongside Bereet.[1]

Ava'Dara is a Royal Warbird of Deathbringer Class with the following abilities:

Warbird possesses the normal strength of a Shi'ar woman who engages in intensive regular exercise, She can lift (press) over 1 ton.