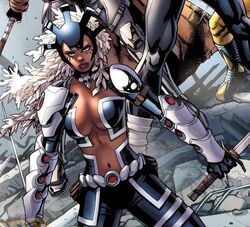 I swear by my life, I will never fail you again, Majestor.

Ava’Dara Naganandini is one of the Shi’ar’s most elite warriors. She is close with Princess Cal’syee, who would go on to become Deathbird. Ava’Dara, however, adopted the moniker of Warbird and became one of Majestor J’Son’s most trusted lieutenants.

She was eventually sent to the Earth to recover his son, Peter Quill, and bring him to the Shi’ar Empire. However, she was met with complications in the form of a Badoon war fleet, who abducted both her and Peter. They were sold into the Badoon slave trade, and Warbird ended up being purchased by a Shi’ar faction, who returned her to J’Son.

He was furious with her for failing and threatened to sell her to the Kree Empire, but she swore she would make it right and vowed to give everything she had to finding him. J’Son decided to give her a chance to live up to this promise, and she the spent several trying to hunt him down.

Eventually she encountered a lead about the Guardians of the Galaxy, which she brought back to J’Son. This led to the Star-Lord being recovered and Warbird finally making amends. However, during the battle after Star-Lord betrayed his father, Warbird met her end while in combat against J’Son’s other daughter, Lilandra.

Retrieved from "https://marvelcomicsfanon.fandom.com/wiki/Ava%27Dara_Naganandini_(Earth-101)?oldid=255278"
Community content is available under CC-BY-SA unless otherwise noted.