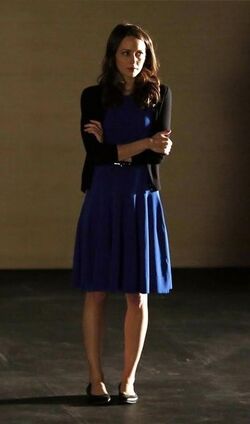 Audrey is a cellist living in Portland, Oregon. She entered a romantic relationship with S.H.I.E.L.D. agent Phil Coulson after he saved her from her superpowered stalker Marcus Daniels, but their relationship ended in tragedy when Agent Coulson was killed in the line of duty.

Marcus Daniels was eventually freed from his prison by Hydra, and immediately made his way back to Audrey. Coulson, who had secretly been revived some time before, made it his personal mission to protect her from Daniels, but couldn't let her know he was alive again. Disguised as CIA, S.H.I.E.L.D. agents Jemma Simmons and Antoine Triplett picked Audrey up.

Retrieved from "https://marvelcomicsfanon.fandom.com/wiki/Audrey_Nathan_(Earth-1010)?oldid=100112"
Community content is available under CC-BY-SA unless otherwise noted.