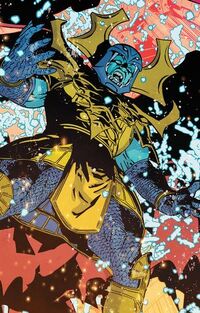 "Your kingdom?" I think you're mistaken, Rice; Atlantis is mine!

Attuma gathered an army and over took the city of Atlantis and imprisoned King Rice. Unbeknownst to Attuma, Queen Dorma was able to escape to the surface world and enlisted the help of Squadron Supreme to free Atlantis. Freed from prison, Amphibian challenged Attuma to one-on-one combat for control of the nation; King Rice won and Attuma and his minions were banished.

Retrieved from "https://marvelcomicsfanon.fandom.com/wiki/Attuma_(Earth-32)?oldid=255356"
Community content is available under CC-BY-SA unless otherwise noted.