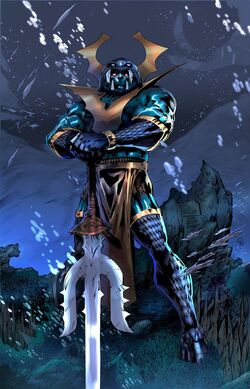 The Rightful Heir to the Throne of Atlantis
Identity

One day, Namor, you will meet your end. And I will be there, with blood on my sword and a smile on my face.

Attuma was once the most decorated Atlantean soldier. After World War 2, when Atlantis started going into poverty, Attuma rose to power and began reveling in being a King.

Things changed when the rightful King Namor returned. Attuma was overthrown by the people who were unsatisfied with his rule, and he was cast out. Over time, he started forming a rebellion against Namor to reclaim the throne.

He would eventually be challenged by the Fantastic Four, who were in allegiance with Namor. This led to Attuma developing even more of a distaste for the surface world, particularly the so-called superheroes. He was later recruited by Doctor Doom to join his secret society called the Cabal, who were to work together to overthrow the superheroes.

Retrieved from "https://marvelcomicsfanon.fandom.com/wiki/Attuma_(Earth-101)?oldid=250449"
Community content is available under CC-BY-SA unless otherwise noted.