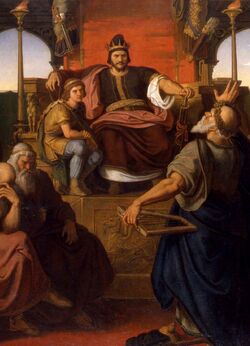 Born on the year of 406 A.D., the tyrannical, fierce, and power-hungry ruler of the Hunnic Empire between 434 and 453, Attila the Hun notoriously became a feared opponent of both the Western and Eastern Roman Empires during his consistent reign of terror. However, unbeknownst to most historical sources, Attila's power and sovereignty over his reign wouldn't have been achieved successfully if it wasn't for the secret source of his ultimate power, which was the "Elixir of Life," a mysterious formula that he and some of his fellow noble men had obtained from "mysterious seedlings" of a "fossilized organism," after a short clandestine expedition in the unknown regions of Western Europe, something that apparently halted his aging completely, along with other features that permanently enhanced his physical functions to remarkably superhuman levels.

By the year 452 he had decided to invade the country of Italy, only days after gaining his superhuman enhancements. He sacked several cities in the northern provinces, which were razed completely in the process. The Roman Army continued to harass and slow his progress, but he continued to the River Po, where it is possible he stopped because of illness and starvation in his camps, something that Attila himself couldn't prevent. Envoys were sent to him outside of Mantua to negotiate peace. Italy, which was suffering from an intense famine at the time which only worsened from the invasion, was hardly worth conquering, and some of the troops he had left behind were getting attacked, so Attila agreed to peace and withdrew. He began to plan again for an invasion of Constantinople, partly to reclaim the tribute which had been stopped while he was occupied in the West. He crossed the Danube twice and plundered the Balkans, but was unable to take Constantinople later on.

In the early months of 453, however, he unexpectedly died at the age in his late 40s, not knowing that it would be at the hands of his own wife during the day celebrating his latest marriage to his last known wife. It is generally believed that he suffered a nosebleed while drunk and drowned in his own blood due to reasons unknown, although it was revealed that his last wife, Ildico was actually the one truly responsible for his demise, whose intention of poisoning her own groom's wine was due to the "presence of a light" that introduced to her by a secret society that she partook in, and according to her own words, had "shown her the way to the truth," to who Attila truly was as a powerful conqueror and what the potential dark future showed her before her own eyes, if he remains to live on throughout the following centuries.

After Attila's death, his close adviser, who was also Ildico's secret ally Ardaric of the Gepids, had courageously led a Germanic revolt against the abusive Hunnic rule now that its leader had perished and couldn't lead them in the process, after which the Hunnic Empire quickly collapsed, ultimately ending the threatening overall dominance of the Huns in Eastern Europe.

Elixir of Life: Any and all superhuman attributes that Attila has were due to consuming a substance of the mysterious Elixir of Life, transforming him into a so-called "superhuman." The chemical process is hormonal in nature, causing his cells to instantly manufacture mutated hormones. Attila's usage of the super-soldier steroid known as Source allowed him to permanently enhance his physical functions to superhuman levels, particularly his strength, endurance, and speed.

Through the use of the Elixir of Life, a regenerative elixir created from ancient Celestial fossils, Attila, along with the other leaders of his secret league, would have had his lifespan extended by centuries, if he wasn't already killed by his wife, Ildico, by poisoning his drink with a dangerous toxin, something that even the elixir's enhancements couldn't fight off his system.

Retrieved from "https://marvelcomicsfanon.fandom.com/wiki/Attila_(Earth-61656)?oldid=234951"
Community content is available under CC-BY-SA unless otherwise noted.