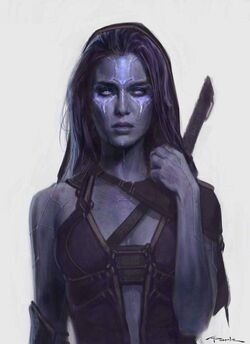 I'm an abomination. If I could die, I would kill myself. But I don't think I can, so I'll just have to settle for killing Ultron. And maybe Apocalypse.

Atara is a clone created by Ultron using genetic tissue acquired from Apocalypse. Ultron's intention was to breed a living weapon capable of killing Apocalypse, however he did not predict Atara developing her own consciousness and abandoning Ultron's empire.

She was eventually found by the Avengers after Apocalypse discovered her existence and marked her Person of Interest #1. She was taken in by the Avengers who attempted to help her adapt to being alive, and attempted to teach her to use her powers creatively rather than destructively. During this time, she became very close with the Avenger, Spider-Man, who is also a clone, which they bonded over.

Retrieved from "https://marvelcomicsfanon.fandom.com/wiki/Atara_(Earth-9999)?oldid=245799"
Community content is available under CC-BY-SA unless otherwise noted.