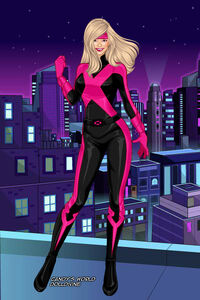 Single
First appearance
Sisters Are Doing It For Themselves

Ashley is Alexandria's twin sister, and the younger sister of Marvel Girl, Cable, Miley, Megan and Jonathan from her father's previous relationship, and her older half-sisters are the Frost Sisters.

Ashley is the girly-girl of the Summers Clan, and quite intelligent. But don’t let the pretty face fool you: she can hold her own as team player with the Underground X-Men. In addition to the powers she and her twin sister Alexandria inherited from their mother, Ashley is a strong combatant and a junior black belt in Shaolin Kenpo Karate. She is very close to her siblings, particularly her twin sister.

Ashley has has dual powers of telepathy and telekinesis from her mother and she is also an Omega Level Mutant.

Retrieved from "https://marvelcomicsfanon.fandom.com/wiki/Ashley_Summers_(Earth-16160)?oldid=230987"
Community content is available under CC-BY-SA unless otherwise noted.