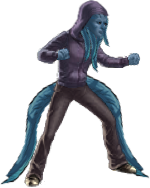 First appearance
Among Us Hide...

Ash Minnick is a newly emerged Inhuman from Sydney, Australia who was captured and imprisoned in a cell to be shown off as a freak during a mock protest by the Watchdogs. She was found after the Royal Inhuman ambassador Crystal was visiting Sydney on a humanitarian mission. She engaged the protesters in a fight but was ambushed by one of the men who happened to also be a new Inhuman who was disgusted by what he was turned into.

Ash sat quietly in the cage as Crystal and her recently arrived entourage defeated the rioters. Ash was released from her prison by Naja, who thought he was drugged due to her calm demeanor but she said that ever since the change she hasn't been able to feel anything. She asked them if that was normal with Karnak replying that being an Inhuman, nothing was normal. Ash left with the others in their ship.

Health Manipulation: Panacea has the ability to heal, as well as hurt, any biological organism's state of health, either curing damaged or withered body parts, wounds, broken bones, low vitality, and diseases or poisoning; or conversely accelerating malignancies and cancers to the point of creating and progressing tumorous growths within a person's brain. Though she can potentially heal most forms of bodily damage, some deformations run too deep for her to heal. That said the full extent of her powers is unknown.

Retrieved from "https://marvelcomicsfanon.fandom.com/wiki/Ash_Minnick_(Earth-1010)?oldid=259068"
Community content is available under CC-BY-SA unless otherwise noted.