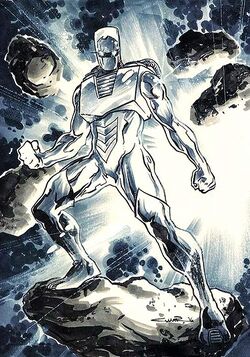 Galador stands, no matter what dark hour is upon us.

The Galadorian, Artour was born in the early years of the horrific Wraith Wars: a decisive conflict between the civilized and peaceful Galadorians and the demonic Dire Wraiths. Due to his birth place on the civilization's capital planet of Galador, Artour was relatively safe from all the conflict on the outer fronts. That is, until portals from the Dark Nebula itself came pouring in on Galador, swarming the unprepared planet.

The young Artour came to witness his first Spaceknights fighting in the skies against many Dire Wraiths and Deathwings. As he was led along the evacuation routes, his former thought of the Spaceknights' invincibility faded the moment he saw a Spaceknight being torn apart. Hours later, a contingent of Spaceknights led by the Firefall Tarn drove away the Wraiths from the planet. Traumatized by the experience, Artour quickly returned home lucky enough to find his old father alive.

His mother, however, was left undiscovered and her whereabouts were unknown. Artour's father had kept his mother's whereabouts a tight secret until Rom found out the truth himself while walking through the ruined streets of Galadoria. Apparently, his mother was a Spaceknight clad in white armor and she's the Knight he saw getting torn apart. Immediately heartbroken, he returned to his father in hopes of repaying his mother's heroism.

Determined to become a Spaceknight, he trained hard and entered the Spaceknight Academy. He didn't excel at anything, but what impressed everyone was his determination and steel-hard will. When his father died of a disease, Artour briefly mourned before training even harder.

Eventually, Artour graduated and was eligible for the Spaceknight Process. While rumors of deaths among the candidates circulated within

Artour's brain, he ignored them and participated in the process. The process was grueling and painful, even with anesthetics applied. Nevertheless, Artour was successfully bonded with bionics that would make him capable of wearing Spaceknight armors. In doing so however, he lost a part of his 'humanity'.

When it was time for him to decide his armor and Spaceknight name, he remembered his mother's armor and decided so. As for his Spaceknight name, the origin of Rom is still a mystery until now kept closely by Artour himself. After bonding with his armor, Rom went on to become an apprentice of the same Spaceknight that saved him, Tarn. He befriended other Spaceknights as well, his valiance rewarding him with fame among the Galadorians. Though such fame couldn't rival what came to Rom in his next years of service.

On a fateful day, Rom would encounter the biggest threat he'd ever known in his early career. While tasked to monitor the Golden Galaxy's border with the Dark Nebula on a space station, a rupture in space and time tore through the border and unleashed a new type of enemies now known as Wraithknights upon the unsuspecting Galadorians. The Wraithknights were cadres of deceased Spaceknights brought back to life by Dire Wraith magics, equipped with the Wraiths' own devastating armaments.

Surprised, the space station was assaulted by Wraithknights and many variants of Dire Wraiths never before seen in battle. The relatively inexperienced Rom was forced to fend for himself, until his adrenaline kicked in and his will to save Galador rose. Seeing his dead Spaceknights including the veteran Raak, the Breaker, Rom bravely fought off his enemies and exerted himself to the point his circuits nearly burned out.

Holding out by himself, Rom dispatched multiple Wraithknights with his bare hands and literally threw some Dire Wraiths back to the Dark Nebula. Although he knew that he couldn't make it through, he was lucky to have back-up coming for him. Moments before blacking out, the full force of Galador's fleet arrived and saw Rom's body alongside a group of Wraiths retreating to the Dark Nebula. Retrieving Rom's unconscious body, Artour woke up alone hours later in a dropship.

When he tried to figure out what happened, the ship's entrance opened itself and the surprised Rom found himself in the audience of multiple Spaceknights applauding his name and civilians clapping for Rom. It's apparent that through sheer determination, he saved all of Galador. Rom was told that the force invading the station was actually the opening strike of a new Dire Wraith offensive intended to raze Galador once and for all.

Ever since that, Rom has been honored as the Son of Galador, the knight who defended them from the Rupture. He was awarded the highest medal of honor at the time and all Spaceknights, even the Disavowed, came to respect him. Promotions were sure to come for Rom, but the Knight denied it and said that he's just an ordinary warrior.

When the Disavowed discovered the identity of the one responsible for the Wraithknights and mutated Dire Wraiths' creation, a clandestine mission was held. Tracking the Wraith to Earth, the Galadorian Monarchy decided to send a Spaceknight instead of an entire battalion to prevent needless conflicts with Earth's authorities and "remarkable individuals". Knowing that a heroic figure would be more welcomed on Earth, Rom was chosen to track down Dredd and bring him to justice.

Arriving on Earth in Kansas, Rom's atmospheric entry was mistaken by a local farmer as a shooting star. Obviously, she never expected the fallen star to be a mechanical warrior from another world. Scaring her, Rom made her pass out without the knowledge that humans didn't know much of the existence of other races in the universe. Taking her to a farmhouse, Rom tried to explain his mission to Brandy. Although it was hard to make her believe, she trusted him the moment a wave of Dire Wraiths suddenly appeared and assaulted the farmhouse. He soundly defeated them and exiled the Wraiths to Limbo.

Knowing that Dr. Dredd was aware of his incursion, Rom decided to take further actions against him and tried locating him. Staying on Earth for several years, he would eventually take on the Dire Wraiths and other threats alongside notable native heroes and Spaceknights who were sent there the moment it became clear that Rom's presence on Earth was more than being welcomed.

After years of experiencing Earth, Rom would finally find and beat Dredd with Clark, who donned the Starshine armor. Driving him away from Earth, Rom would later leave Earth with the blessing of his Earthbound comrades and returned to Galador where he and Brandy married. Some time before the Invasion of Wraithworld, the couple had sons Balin and Tristan.

As the Galadorians gained more and more advantages over the Wraiths, Rom suggested the staging of an invasion of a titanic scale on Wraithworld in an effort to stop the endless suffering once and for all. While Rom's suggestion was valiant, at the same time it was controversial because the Spaceknights' numbers were dwindling and the new recruits were not yet ready.

Although risky, the invasion was finally accepted with most of the participating Spaceknights being veterans including Rom and Brandy. The full force of the Galadorian Fleet was summoned, showing off the power of a navy never before seen by the galaxy. All available Galadorians from civilians to the Prime Director's council played their part in the invasion. When the time came, the Dark Nebula was teemed with hundreds of Galadorian ships descending upon Wraithworld while crashing through waves of Wraithknights and Dire Wraiths.

Rom and Brandy took it upon themselves to wipe out the Wraiths on the front lines. When Rom spotted the main citadel of Wraithworld, he attacked the unholy structure with his wife's support and they reached the top, where Doctor Dredd revealed his plan to annihilate the Galadorian Fleet while leaving the Dark Nebula untouched. A brutal battle ensued between the three and resulted in Brandy's broken legs. An enraged Rom soon banished Dredd to Limbo by generating a portal in his head. Without Dredd's intervention, Rom tried to stop his bomb's detonation and partially succeeded; the bomb blew the planet up while Rom and Brandy survived the explosion thanks to their armors.

In the aftermath, Rom returned to Galador's service while Brandy became the latest Prime Director. Though Rom still works as an inspiration for younger Spaceknights and an Agent of Galador, he always tries to spend time with his family with his missions being the greatest obstacle for him. Nevertheless, his two sons grew up looking up to and admiring him.

Rom is an expert fighter, marksman, pilot, and strategist. Being born in a time of war, Rom was taught survival skills, and as a result he's a resourceful person. He is specialized in Galadorian engineering and knows every bit of Galadorian tech. Rom is also a fairly good negotiator/mediator, going for peaceful ways first and direct actions later if diplomacy fails.

Like other Spaceknight armors, Rom's plandanium plating is susceptible to EMP and large amounts of electricity. It also has a limit to how much energy it can absorb. Exerting the armor long enough will eventually weaken and force it to reboot itself.

Retrieved from "https://marvelcomicsfanon.fandom.com/wiki/Artour_(Earth-5000)?oldid=240622"
Community content is available under CC-BY-SA unless otherwise noted.